The north-coast of Brazil we consider to be the stretch of land which runs roughly from Fortaleza, in Ceará state, to Sao Luis, in Maranhão state. This route is known locally as the Rota das Emoções, the Route of Emotions as the coastal route is so contrasting.

The old town of Sao Luis is a UNESCO heritage site which was originally founded by the French and named after Louis XIII. It’s a perfect starting point to explore the coast, along with the nearby town of Alcântara. If you are looking to get away from the coast there there’s nowhere better than the Serra da Capivara National Park. Many of the numerous rock shelters in the Serra da Capivara are decorated with cave paintings, some more than 25,000 years old. They are an outstanding testimony to one of the oldest human communities of South America and over 300 archaeological sites have been found within the park. As you venture along the coast east from Sao Luis you will come to Barreirinhas, the gateway to Lençóis Maranhenses National Park. This is a vast area of sand and dunes which fill with huge pools of fresh water to create an amazing sight. The heavy rains in the region tend to fall between March and May making the best time of the region to be in the months following this when the pools are at their fullest. The Parnaiba Delta borders the eastern side of Lençóis Maranhenses National Park which is a great area for wildlife and in particular a place to see large flocks of the brightly red coloured Guara bird in flight. A big draw of the north coast is the strong winds which encourage huge numbers of kitesurfers and windsurfers to the beaches of Barra Grande, Cumbuco, Ilha do Guajiru and others. Indeed, many professionals head to this area to hone their skills in the perfect conditions which are on offer.

One of the most sought after destinations on the north coast is the small town of Jericoacoara, better known as Jeri. The town is cut off from main roads by sand and the last stage of any journey into Jeri is made by 4wd vehicle. The opening of nearby Cruz airport has made access to the town far more accessible with direct flights to Sao Paulo and Recife. The town is covered in sand and has some excellent luxury hotels, in addition to the backpacker vibe. Each evening hundreds of people climb up the large sand dune which neighbours the town to watch the sunset before enjoying a cocktail from one of the many stalls on the beach. Fortaleza is the 4th largest city in Brazil and primarily used as a gateway to the northern beaches. The city has some interesting aspects for visitors but many will use it as an overnight stop before moving on. Nearby Cumbuco makes an excellent alternative night stop should you wish to escape the city. The north cost Brazil is remote and diverse and ready to be explored. 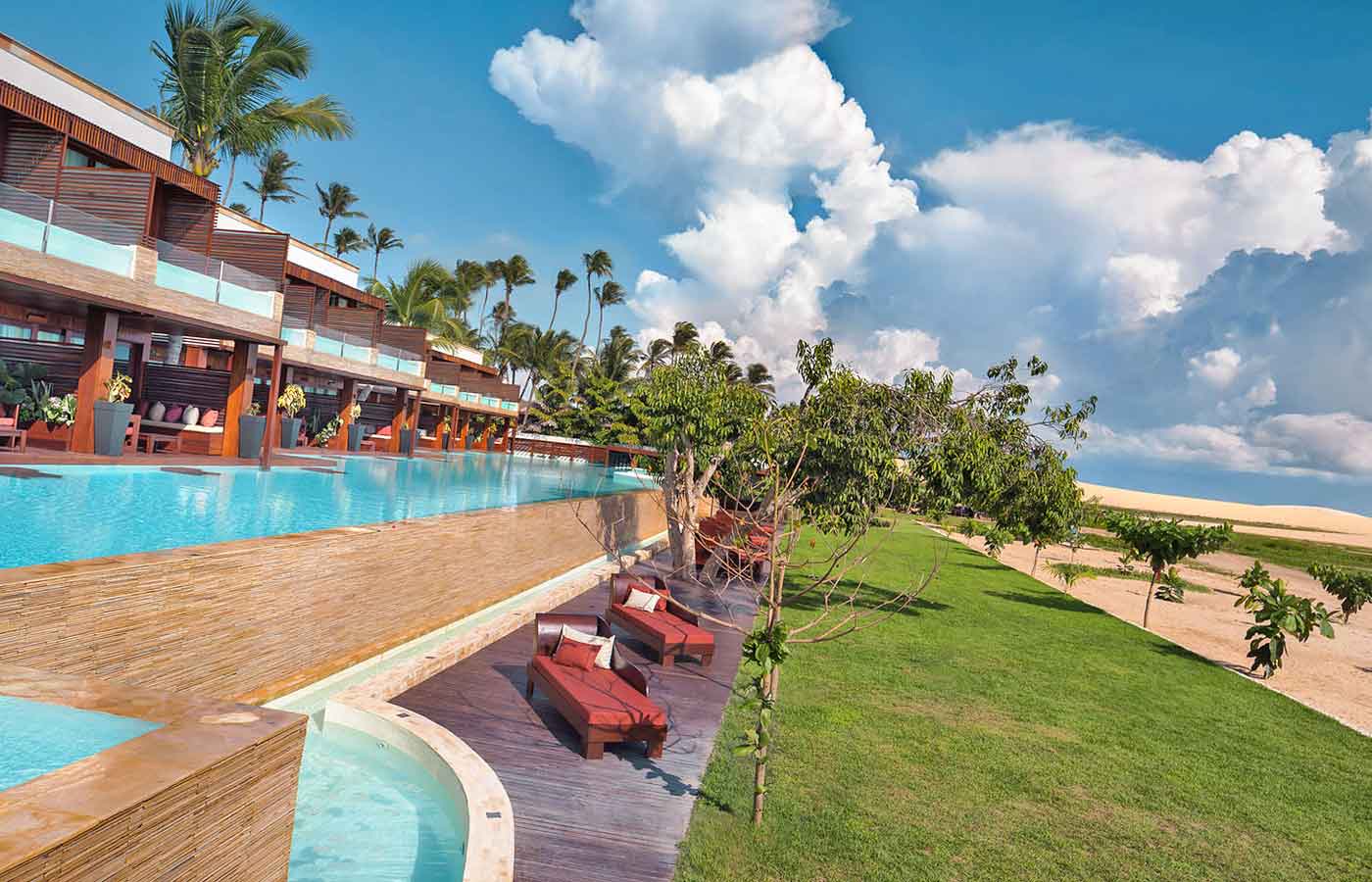 The Hotel Essenza boasts stunning sea views along the beautiful white-sand Jericoacoara Beach. This luxurious beachfront hotel and all of the apartments have spectacular views over the sunset dune and the National Park of Jericoacoara plus plunge pools on the balcony or direct pool access. 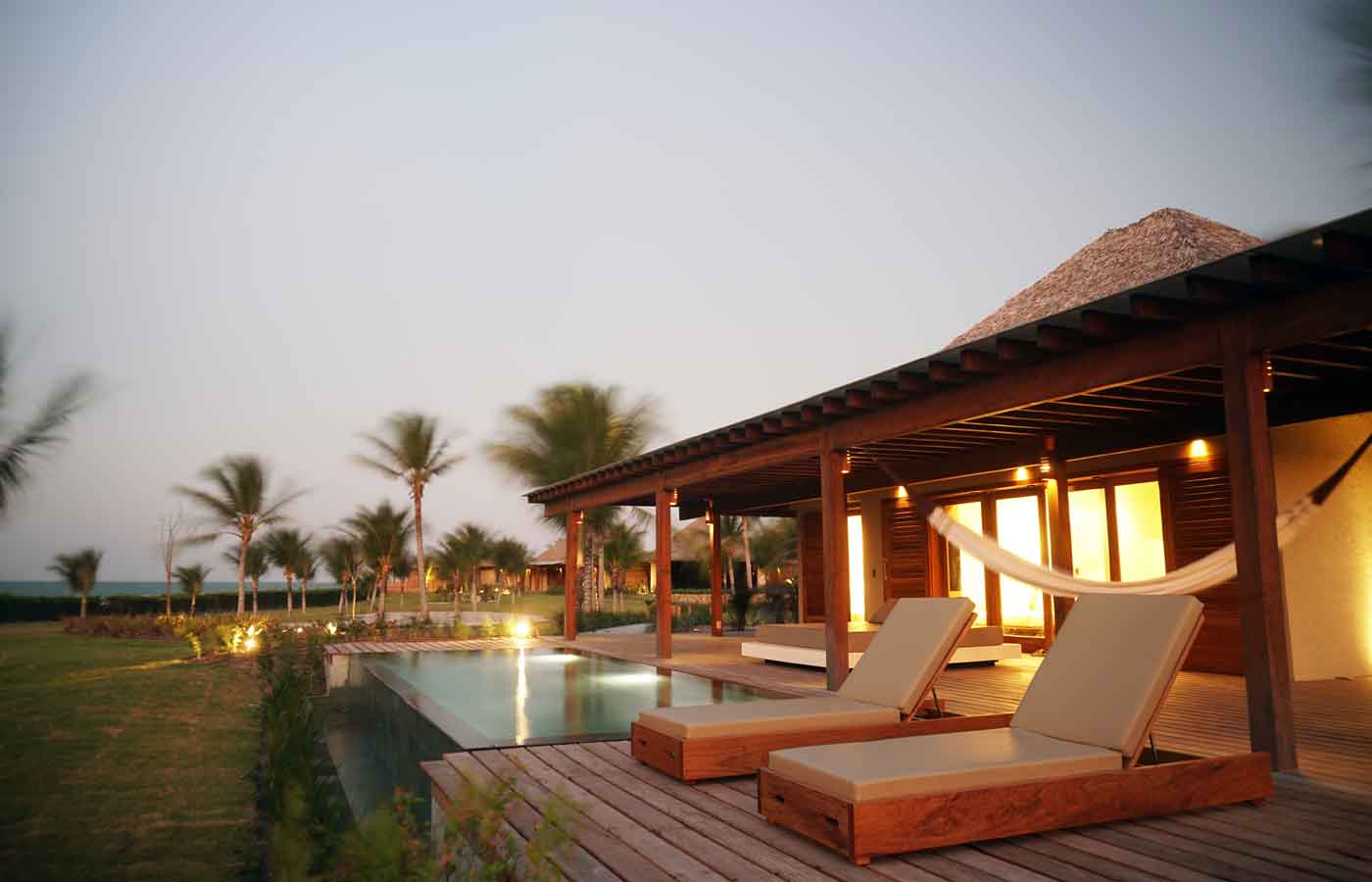 Casana is an ultra modern luxury beach resort in the town  of Prea, just outside Jericoacoara. Every detail at Casana has been thought out and immaculately created in what many consider to be Brazil’s best beach hotel. It’s the perfect place for a luxury holiday to Brazil. 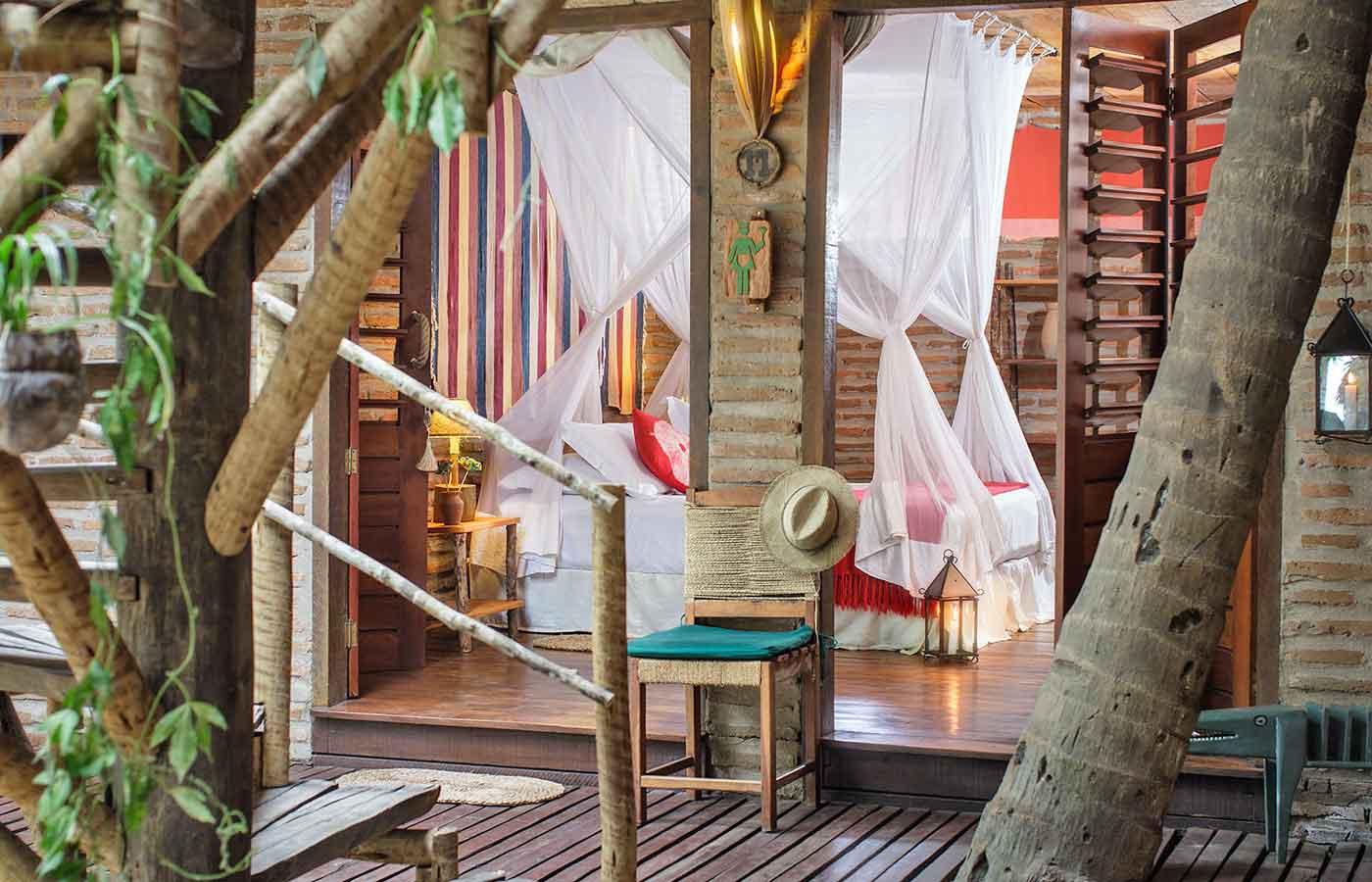 The Pousada Vila Kalango has an incredible location on the beachfront of Jericoacoara and offers a rustic sophistication which will appeal to anyone who wants to get away from it all and relax in comfort and tranquility. 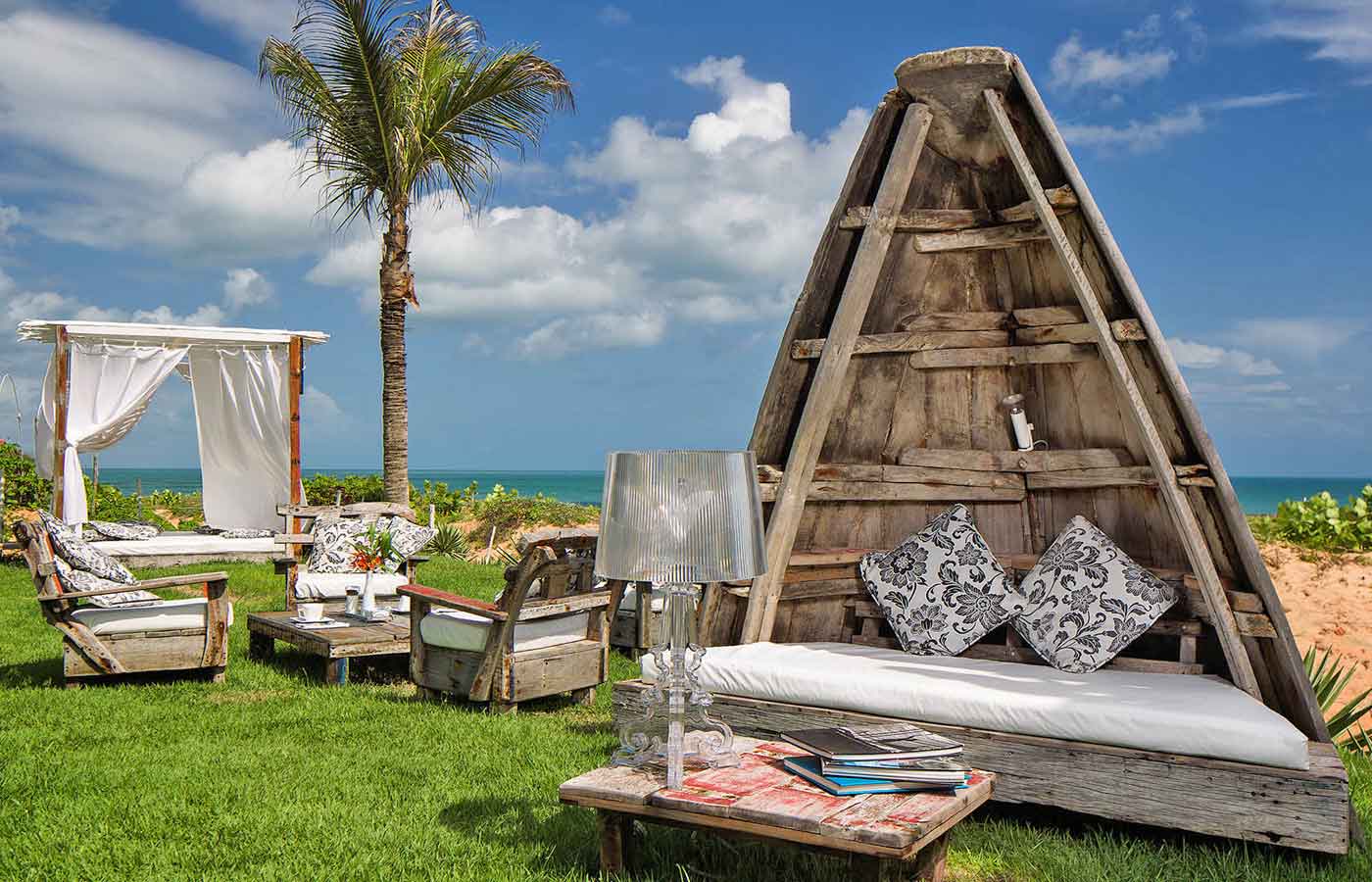 Considered one of South America’s best beach hotels, and justifiably so, as this beachfront hotel in Jericoacoara is simply a wonderful place to stay on a holiday to Brazil. The whole property exudes luxury and guests will love the laid back atmosphere. 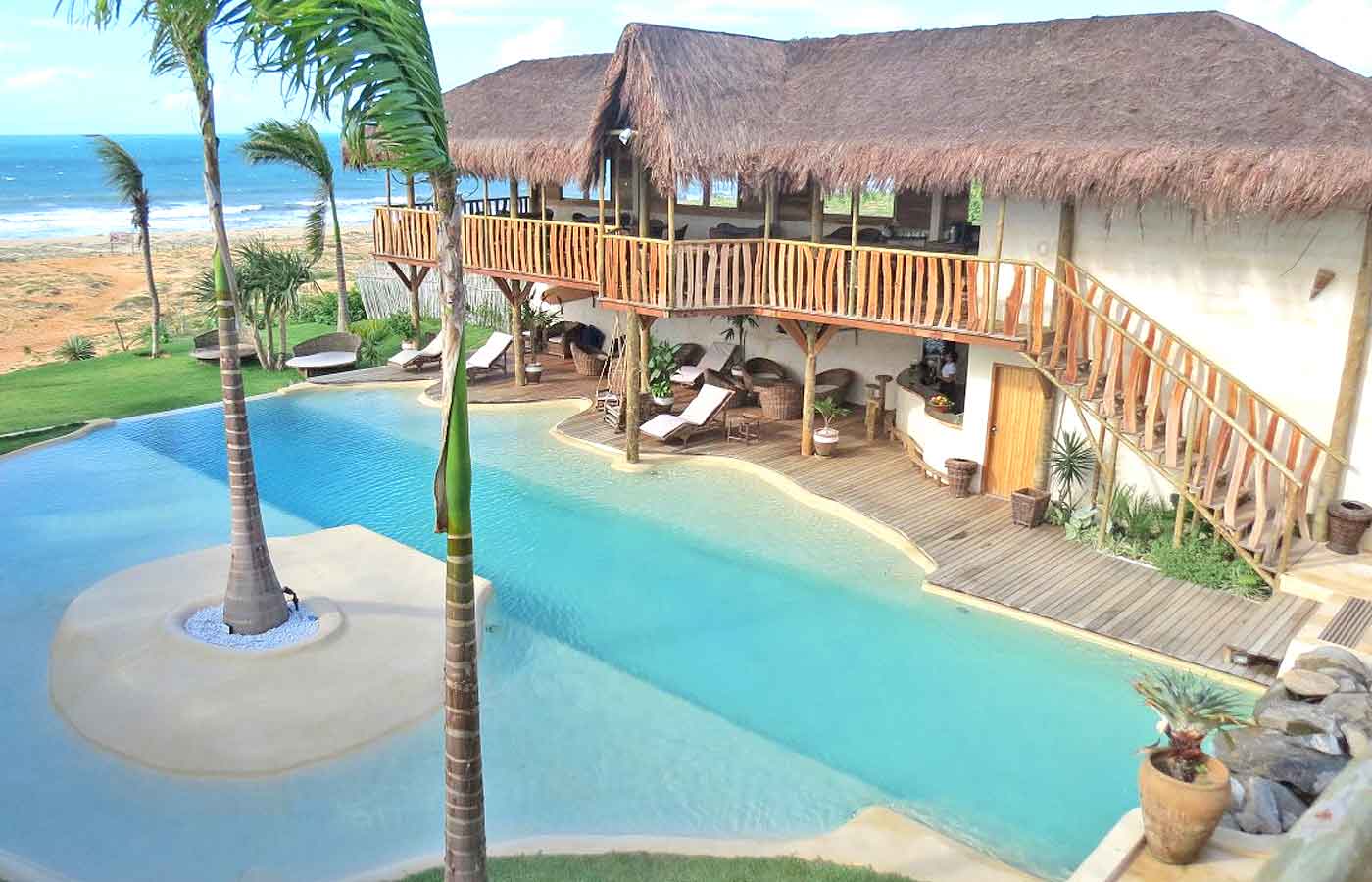 Located in the centre of Jericoacoara and just 50 metres from the beautiful Malhada and Jericoacoara beaches, the Hurricane Jeri offers guest a unique experience. The hotel is surrounded by wonderful gardens, within which guests can find a fantastic lagoon-shaped swimming pool, relax in the luxury of a Jacuzzi or swing in a hammock. 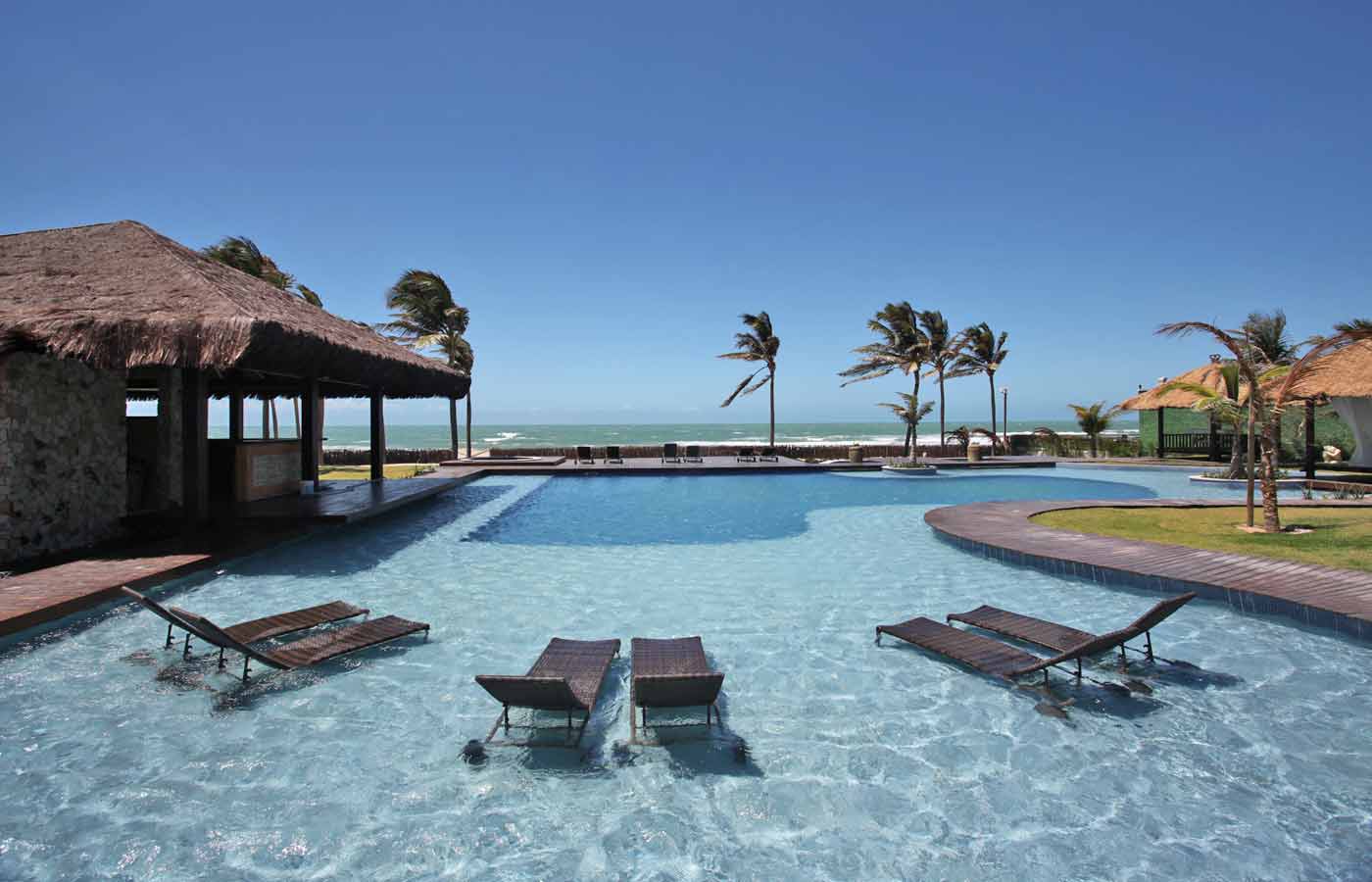 A tropical Brazilian beachfront is the last place one might expect to find an Asian-themed luxury hideaway, but this is what greets guests at Zorah Beach Hotel in the stunning locale of Guajiru Beach, roughly 2 hours from Fortaleza. This hotel offers the perfect slice of paradise on a beach which is deserted save for a few kitesurfers.