Galapagos Wildlife Big 15: Where to See Them

Visiting the Galapagos Islands is a completely unique wildlife experience, top of the list in Latin America for many animal-lovers. Whilst any cruise in the archipelago will expose passengers to a huge variety of species, if your wildlife-spotting wish-list is more specific – you may have to tailor your itinerary to account for island-specific endemic creatures. Humboldt specialist, Clara explains where to find the key unique species in the islands:

A bucket-list experience for many travellers, a journey to the enchanted isles of the Galapagos is always a magical experience. From the sheer abundance of wildlife species both above and below the sea, to the unusual behaviours of the fearless animals on these protected islands, wildlife lovers are guaranteed the trip of a lifetime. Any cruise itinerary or even land-based stay in the Galapagos is guaranteed good wildlife sightings, however some of the most emblematic species in this unique region are specific to certain islands, found nowhere else in the archipelago. To make research easier for potential Galapagos travellers, a list of 15 key species has been developed for those looking to pick the right cruise itinerary for their own specific wildlife-watching wish-list. Here are the Big 15 to spot in the Galapagos, and where to find them:

A firm favourite amongst the tourists who visit the islands, the blue-footed boobies are surprisingly sparsely scattered across the islands compared to other sub-species. The birds are an endemic sub-species that are only seen in the archipelago and are most famed for their bright blue feet, comic mating dances and ability to dive up to 100 metres in search of food from the sea. One of the most beautiful and emblematic seabirds in the islands, most cruises will stop at an island where colonies are present, however these charming birds can be spotted at any given time at sea.

Where to find them: North Seymour and Española Islands are home to the largest breeding colonies, however the blue-footed boobies can be spotted fleetingly almost anywhere in the islands. 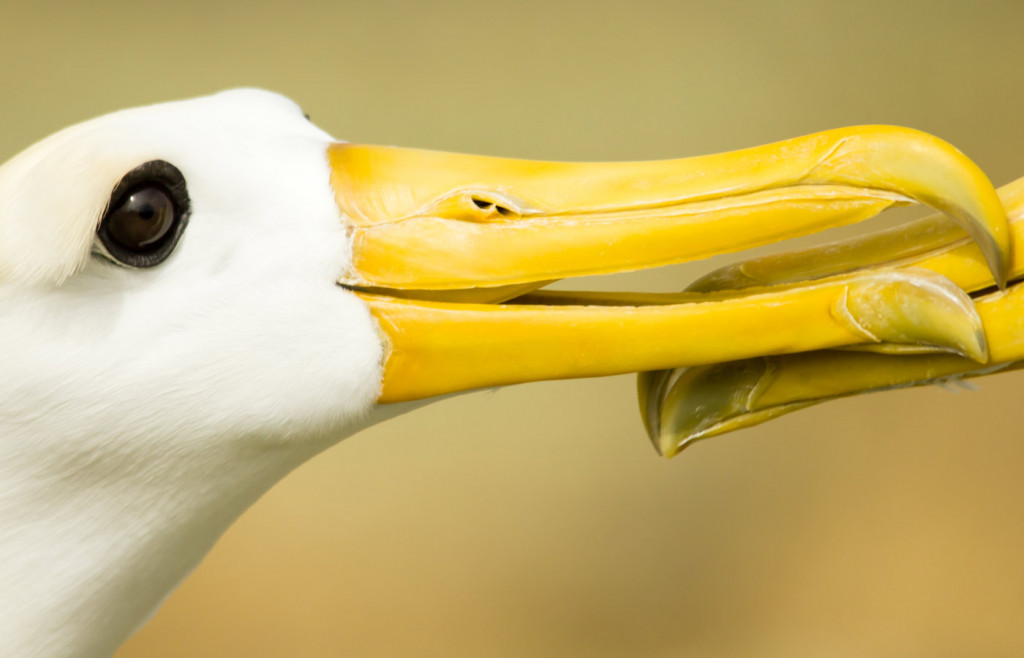 This magnificent bird, also commonly known as the waved albatross, is the largest bird in the islands with an impressive wingspan of up to 2.5 metres across. Harder to spot due to the fact that these birds spend the majority of their life flying or swimming at sea, the best way to catch a glimpse of them is to travel during the breeding season (April), where they make their way to land once per year to engage in their distinctive mating rituals which include ‘dancing’ around one another and clicking their beaks to communicate.

Where to find them: These majestic birds breed exclusively on the island of Española situated in the far southeast of the Galapagos. 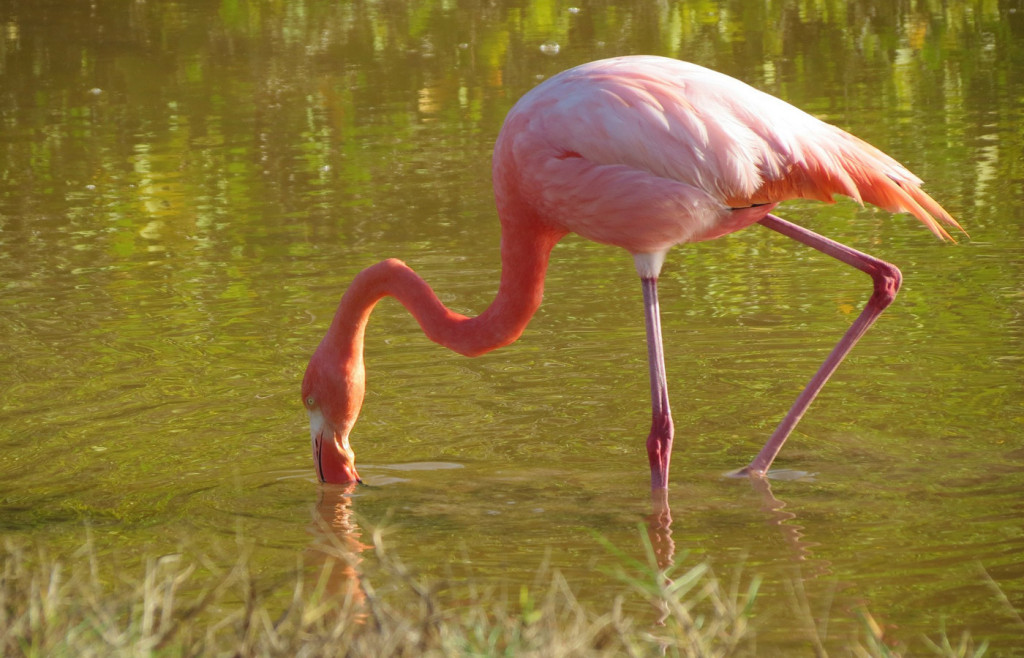 Unquestionably one of the most colourful birds in the world, flamingos are a species that are perhaps not associated with the Galapagos at first thought. Hopping from lagoon to lagoon in search of food, these pink-toned beauties can be found on several islands in the region. As with other flamingos, the depth of colour on the plumage is reflective of carotene-rich natural diet, mostly consisting of small shrimps which they filter through specially adapted membranes in the beak.

Where to find them: Santa Cruz, Isabela, Rábida and Floreana Islands. 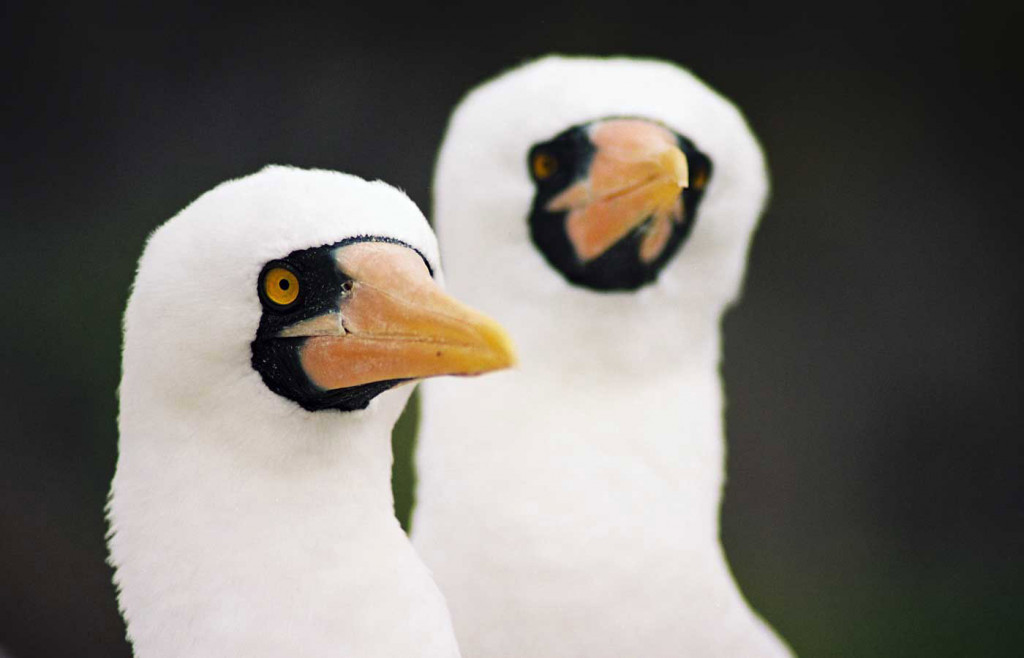 This slender white bird is not unique to the islands and can also be found as far north as Baja California and as far east as the Colombian coastline. Attractive though they are, these birds, the largest of the booby species, are bona-fide bullies. The Nazca boobies are bad neighbours to other seabirds that share their territory and feeding grounds, and also frequently victimise weaker members of their own species. Hatchlings, snuggled in nests built on rocky crags by the sea, will often push their siblings (and potential rivals for food) out of the nest to their deaths in the sea below increasing their own chances of survival to adulthood. This utterly ruthless Darwinism is one of the most vicious examples of how certain species have adapted to the harsh environment of the Galapagos – the surviving chicks, given more food by their parents, grow to become stronger adults more suitable for successful future breeding.

Where to find them: These birds are most frequently spotted on Genovesa, Española and Floreana. 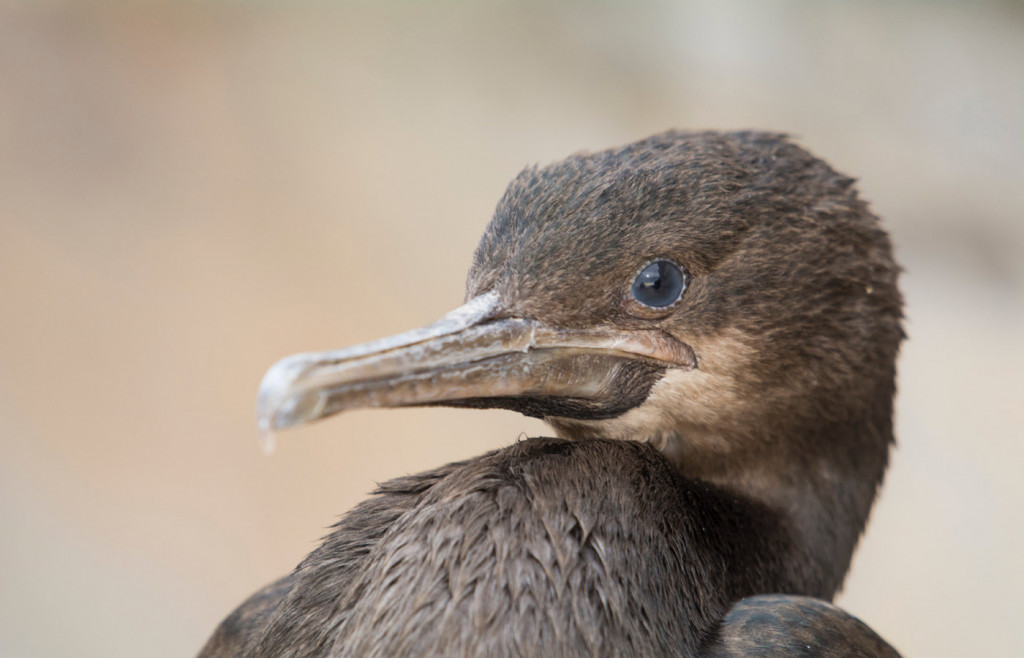 The biggest, most unusual and rarest of earth’s cormorant species, the Galapagos flightless cormorant is most well-known for its distinctive mating rituals, where contrary to most of the animal kingdom, the onus is on the female to compete for the attentions of the male birds. The only cormorant species in existence that does not fly, these pretty birds are truly unique.

Where to find them: You can spot the birds on Fernandina and Isabela Islands. 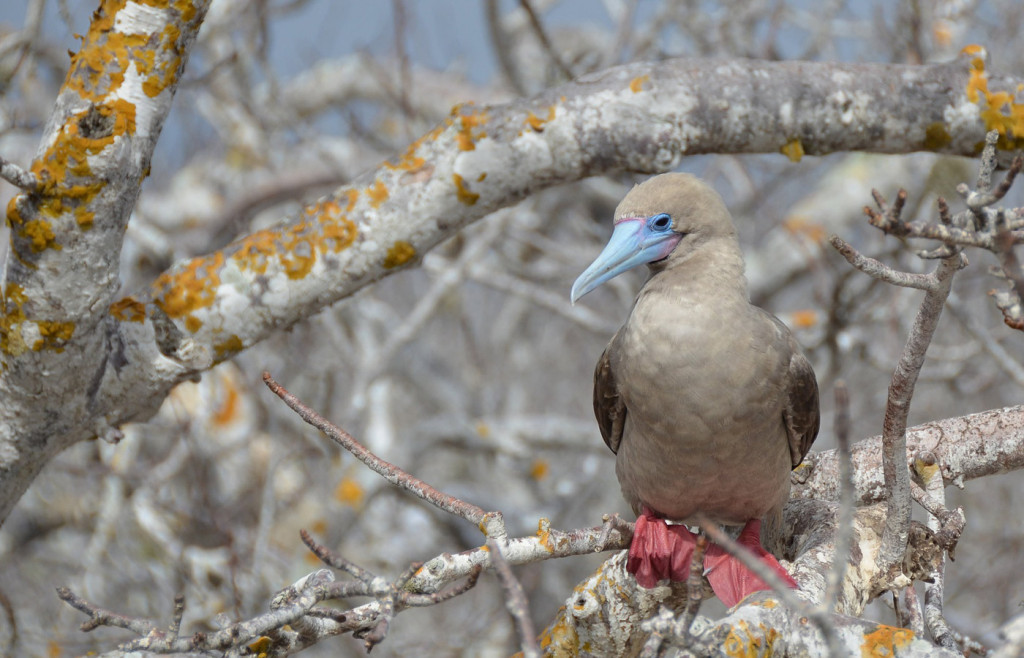 As instantly recognisable as their blue-footed cousins, the red-footed booby is another emblematic bird present in the islands. Population-wise the red-footed boobies are most numerous on the islands, however due to the positioning of their nests, are often less frequently sighted than the blue-footed sub-species. Like the other seabirds in the genus, these birds dive into the sea at extremely high speeds in pursuit of small fish and squid to feed on. Remaining with their mate often over several breeding seasons, unlike other booby species, the red-footed variety nest in trees and bushes rather than by the sea and thus have developed elongated talons, built for gripping and carrying twigs and foliage.

Where to find them: Main sightings occur on Genovesa, North Seymour, the islets dotting the coast of Floreana and Punta Pitt at the eastern tip of San Cristóbal Island.

Suggested Ship: Grace – This classic ultra-luxury ship offers 8-day itineraries that visit either Genovesa in the north, or Floreana in the south 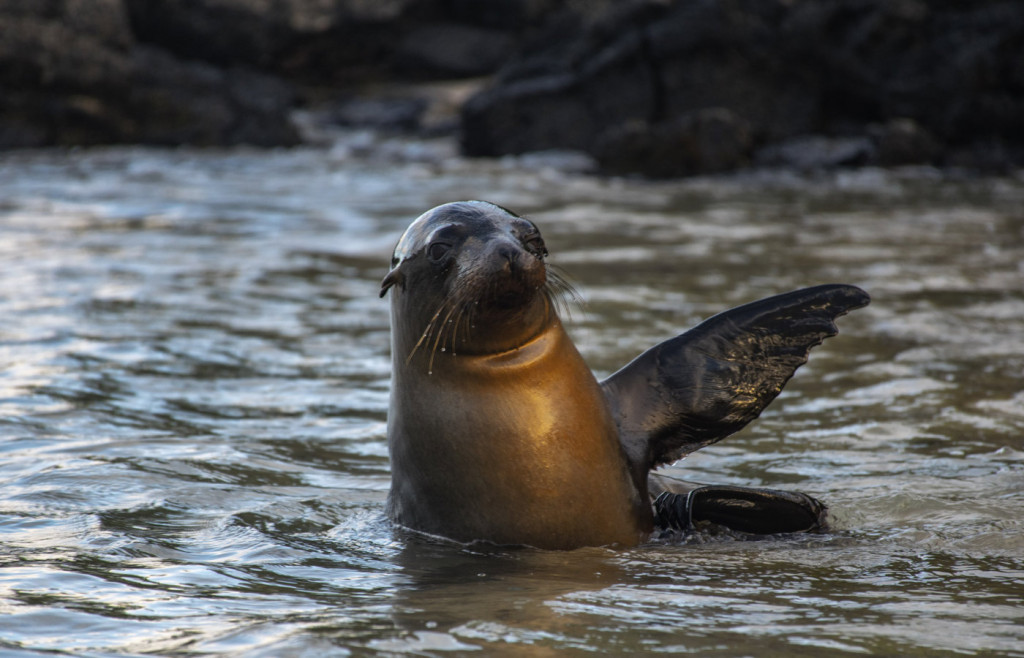 One of the most abundant and charming marine creatures in the archipelago, these sea lions are endemic to the Galapagos and is likely to be spotted relatively frequently during a cruise around the islands. Usually found either casually basking on the beach, or playfully zipping through the waves, observing the natural behaviours of these animals is a highlight of the islands. These social animals are the smallest of the sea lion species and are masters of sea, diving up to 580 metres for up to 10 minutes in search of food.

Where to find them: The sea lions are fairly abundant and can be observed on Plaza Sur, Mosquera, Puerto Egas on Santiago Island, parts of Española and Rábida. 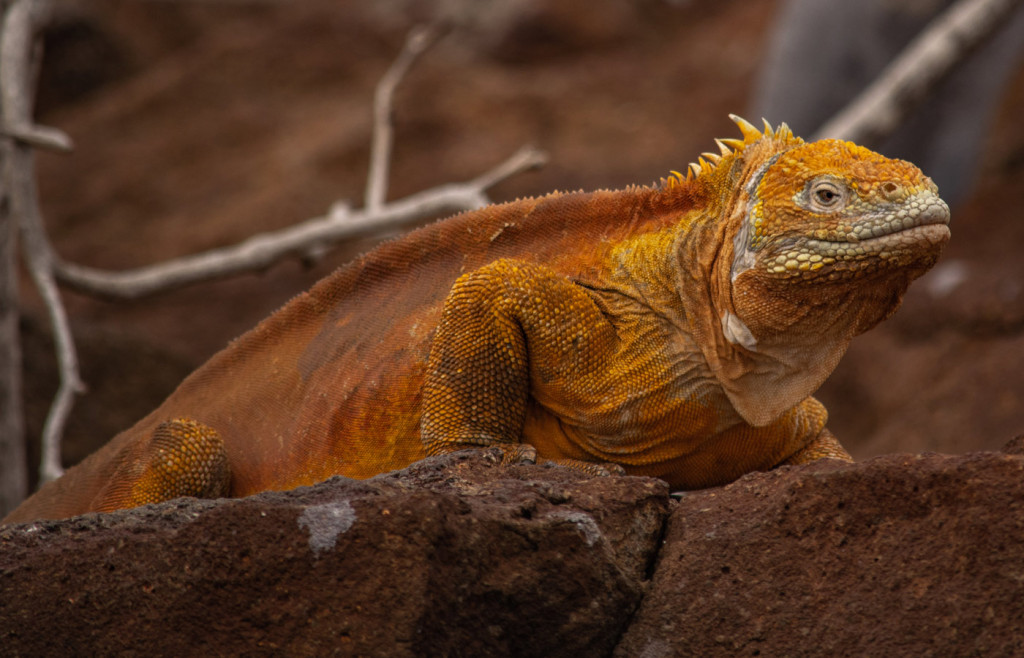 Living up to 55 years in the wild, these large reptiles usually grow to around a metre in length and can be found on several islands. Varying hugely in aspect depending on the environment of the island upon which they are found, these creatures are often separated into three endemic sub-species and were once reportedly described by Charles Darwin as having a ‘singularly stupid appearance’. These reptiles enjoy a symbiotic relationship with many small bird species on the islands which remove parasites from their scales and sleep in burrows at night to conserve the body heat absorbed during long hours basking on volcanic rock.

Where to find them: The three sub-species of land iguana are easy to see. Sightings are common on Fernandina, Isabela, Santa Cruz, South Plaza, Baltra and the Seymour Islands. 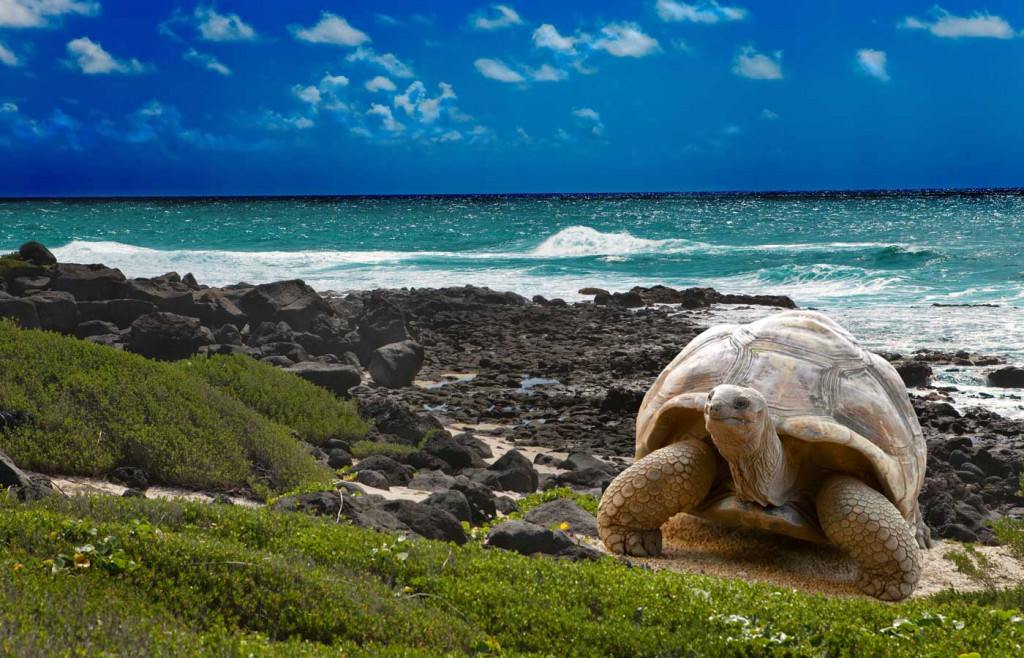 One of the most famous animals on the planet, the Galapagos giant tortoise is the top of many people’s list of species to observe in the archipelago. In fact, the islands themselves owe their very name to the resident populations of tortoises. In the 1500s when Spanish sailors first encountered the islands, they named them using the old Spanish general term for tortoises/turtles – ‘galápago’. This sub-species is the largest species of giant tortoise on earth and can sometimes grow up to 1.5 metres long in total. Varying in appearance in terms of the shape and colour of the shell according to which island they inhabit, these gentle giants can live for over 100 years in the wild and are an unmissable sight during your trip.

Where to find them: Most visitors encounter the tortoises in the highlands of Santa Cruz, but the animals can also be found on Isabela, Santiago, San Cristóbal, Pinzón and Española. 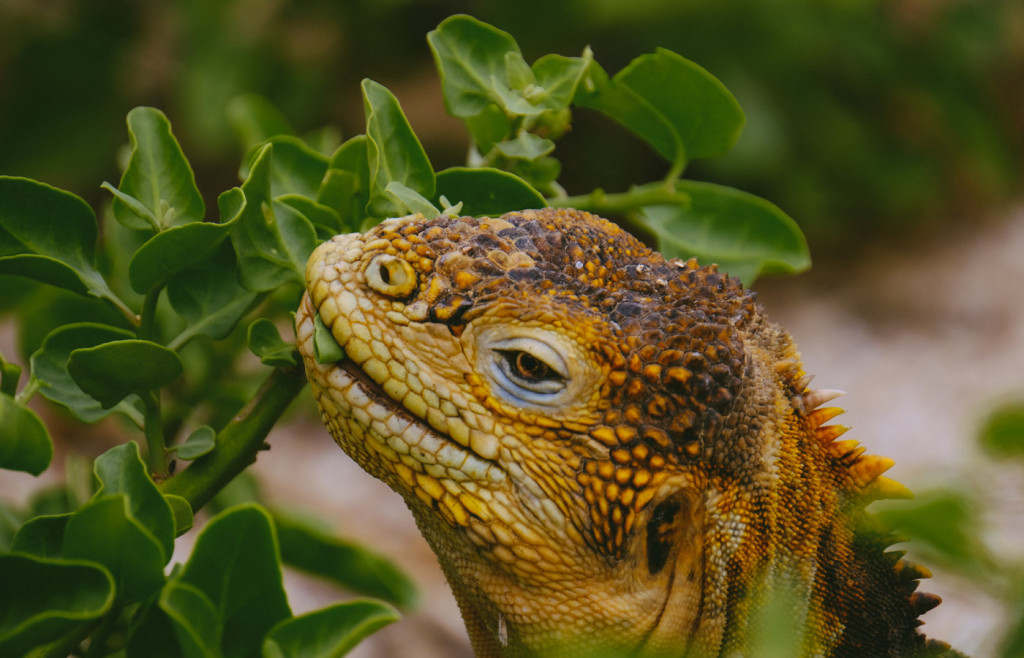 Similar to its cousins, this brownish lizard is well camouflaged and harder to spot than the other sub-species. As the name suggests, this animal is totally unique to the island of Santa Fe and thus one that not all cruises will pick up.

Where to find them: Santa Fe Island. 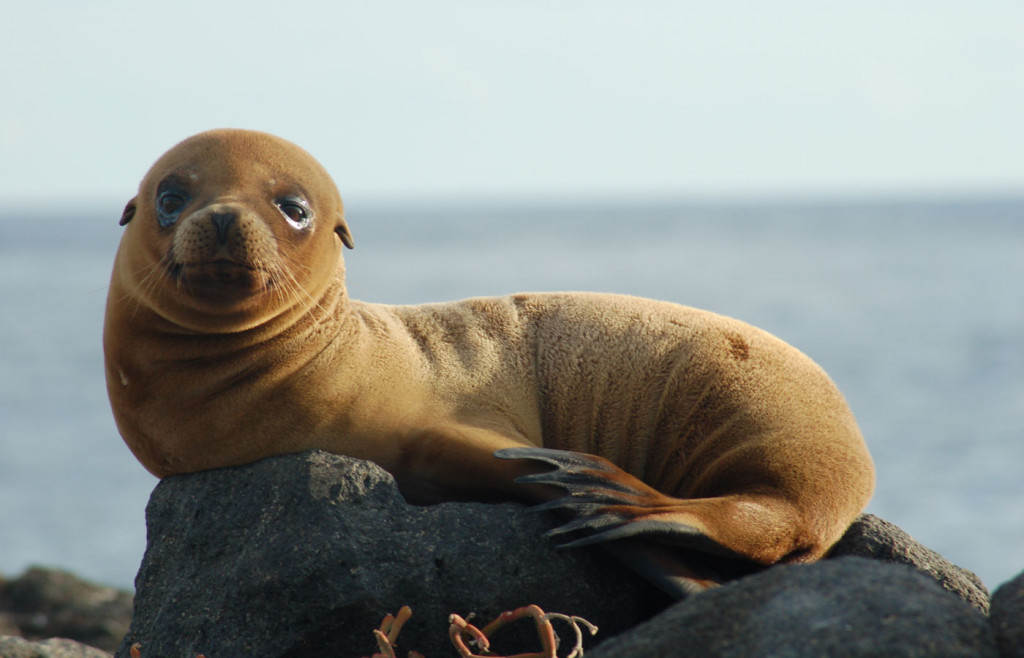 The smallest of all seal species, this endemic Galapagos resident is classed an endangered due to a population that has decreased steadily over recent years in part as a consequence of climate change bringing unusual weather conditions to the islands that have made raising the seal pups more complex. Female seals give birth to one pup at a time and it takes a longer time to raise the pups to independence than for most species, making these catastrophic climate events all the more damaging. Social and playful like many seal species, these animals hunt mostly at night and dive up to 100m.

Where to find them: The seals can be sighted almost everywhere in the islands, but the largest colonies are found on Santiago and Genovesa. 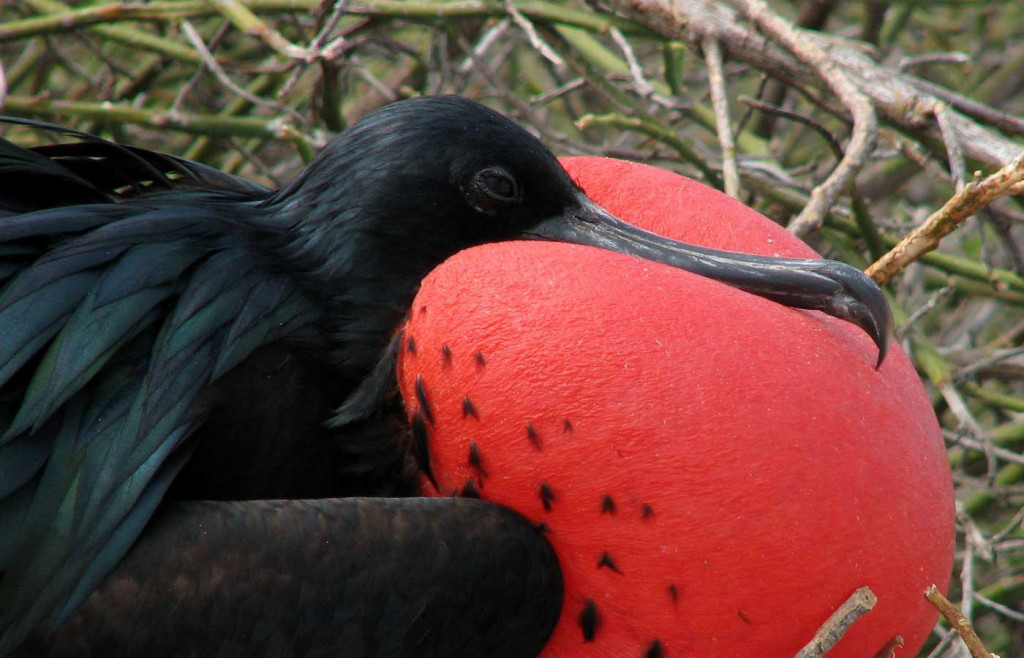 Instantly recognisable for their large red gular (throat pouch), the male frigate birds are a popular sighting for keen birders during breeding season. This ritual is a spectacular sight and can be observed at any time of year, as the frigate bird breeds on and off all year round depending on factors such as rainfall and the availability of food. The gular pouch takes up to 30 minutes to inflate fully. The Galapagos is home to two species that exist side-by-side in large colonies often consisting of 1000 birds or more: the Magnificent frigate bird and the Great frigate bird.

Where to find them: The best place to see nesting colonies are San Cristóbal, Española and Genovesa. 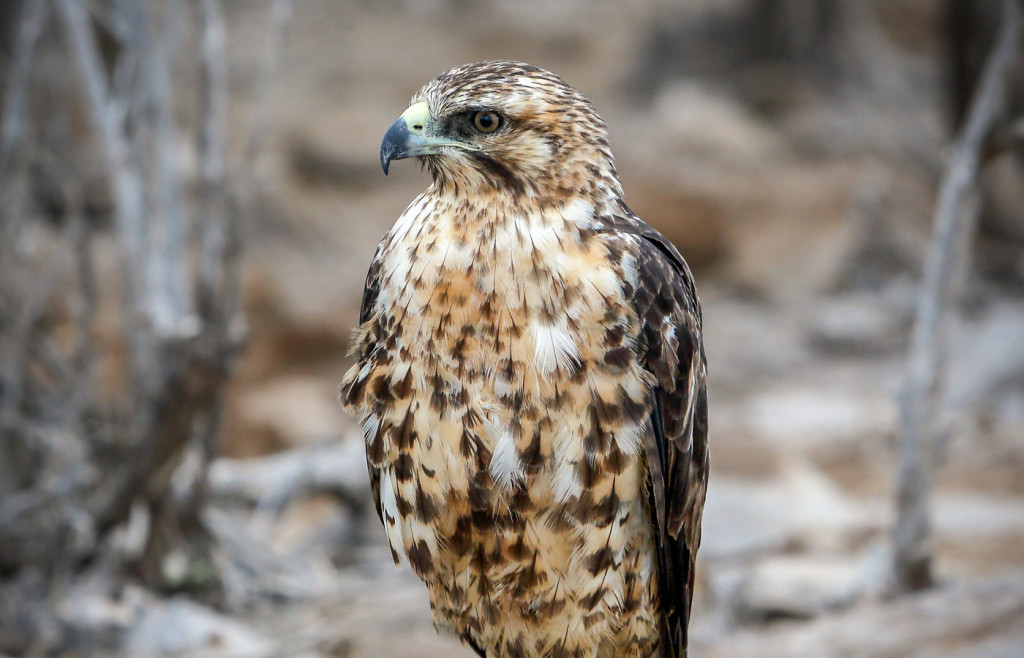 Scientists researching the unique genetics of the Galapagos wildlife have suggested that the Galapagos hawk may be one of the most recent arrivals to the islands at around 300,000 years ago. Perching at the top of the Galapagos food chain, these birds feed primarily on insects, lizards, young sea turtles and other small birds.

Where to find them: Isabela and Fernandina are where most sightings are recorded. 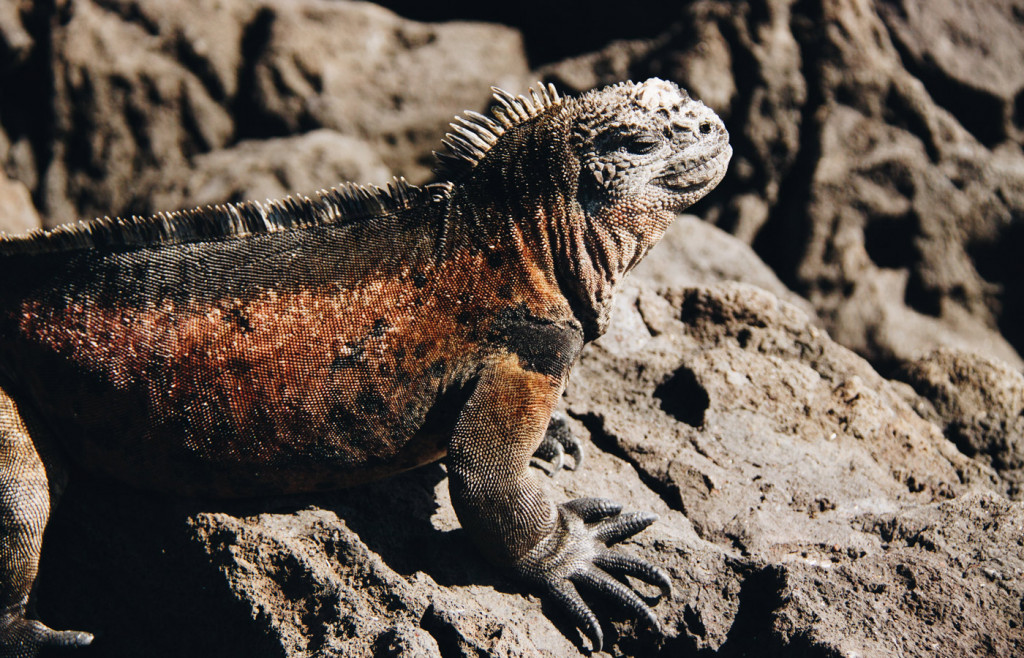 The only iguana on earth with the adaptations to live and forage for food above and below sea, the Galapagos marine iguanas are another wildlife highlight of the region. As with the land-dwelling lizards they are so closely related to, the size, shape and colour of the iguanas can vary dramatically according to the exact conditions of their island environment. Interestingly, the marine iguanas are so genetically close to the land iguanas, that in some specific locations where the two species cohabit, they have been known to interbreed producing viable (but likely sterile) hybrid offspring.

Where to find them: Española, Floreana, Fernandina, Santa Cruz and the surrounding islets. 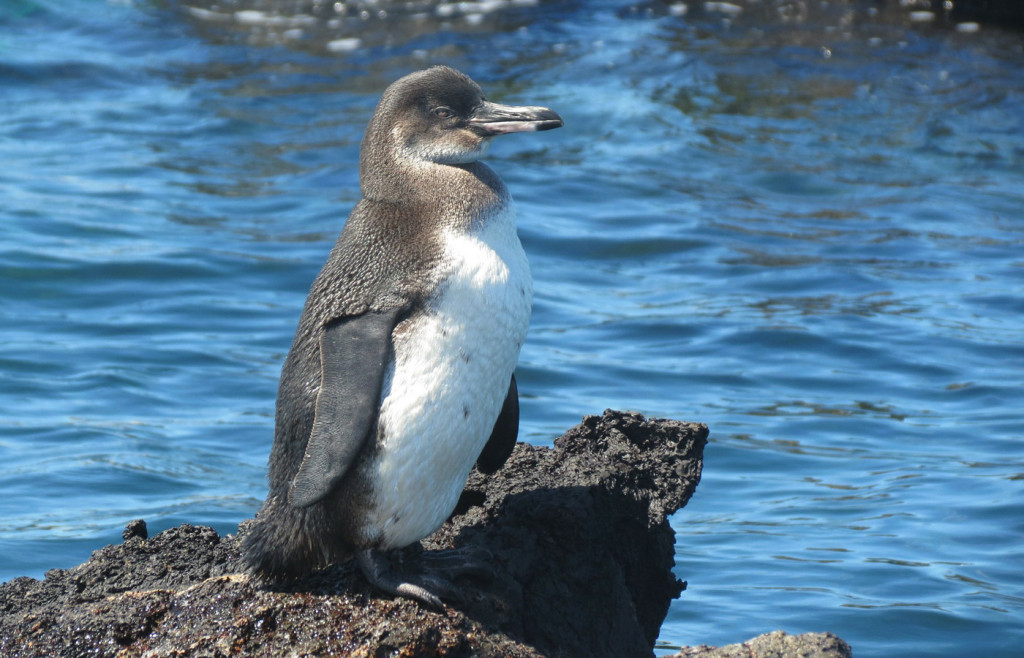 Quite unlike other penguin species, Galapagos penguins have no set breeding pattern and can reproduce up to three times a year, finding a breeding partner and mating for life. The only penguin found north of the Equator, these pint-sized birds are full of fun and playfully zip around in the water as tourists snorkel alongside them. The cooler water flows of the Humboldt and Cromwell currents allow the birds to thrive in this region despite its tropical latitude.

Where to find them: The penguins are common sights on Floreana, Fernandina, Santiago and Bartolome Islands.

Looking to observe any of these unique species? Contact us today and allow one of our travel specialists to tailor a bespoke Galapagos itinerary for you. Read more about Ecuador here and view some of our favourite Galapagos ships here.