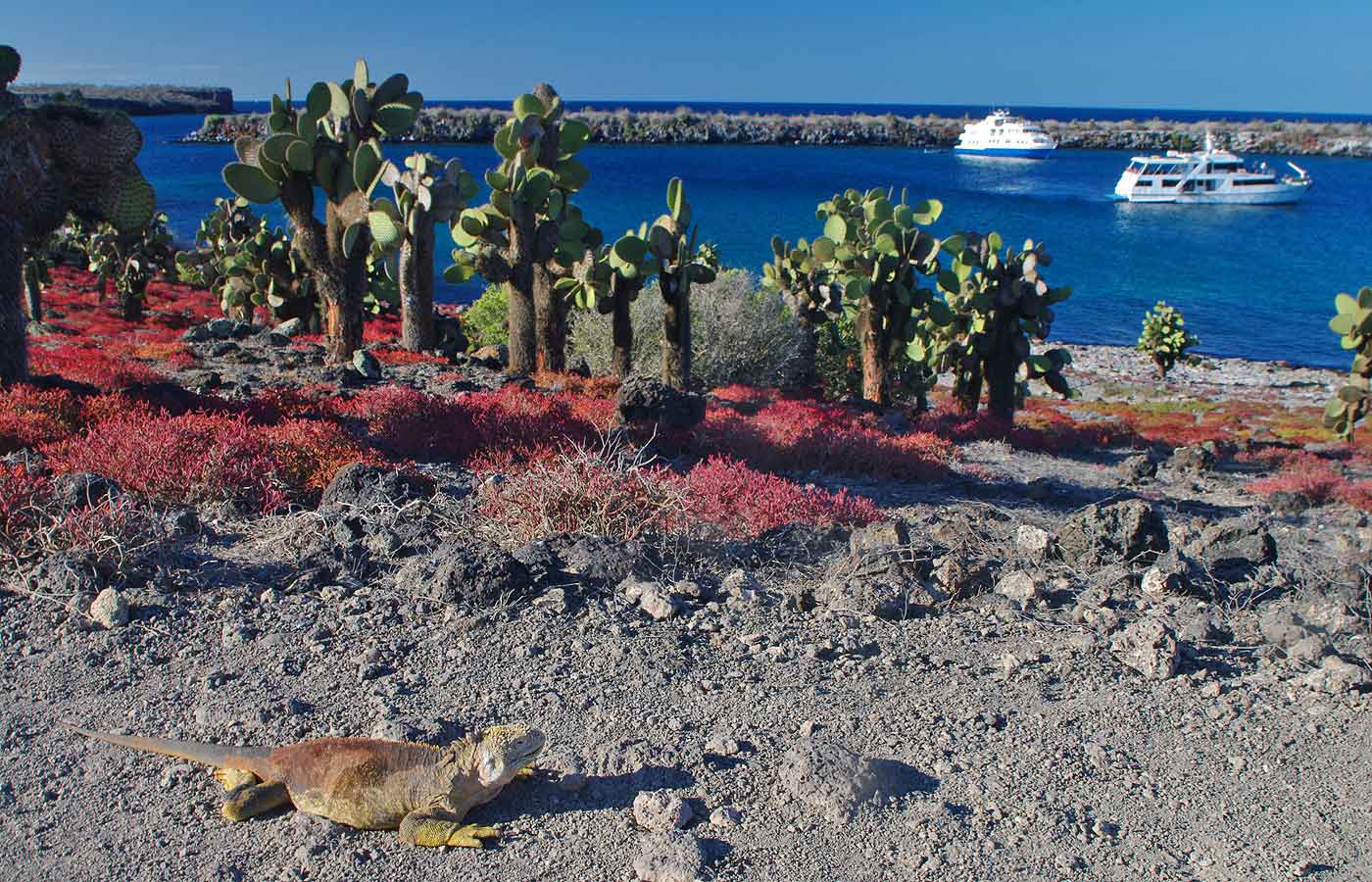 Director Simon headed off to the Galapagos Islands in November for a few days on board the luxury vessel, the Natural Paradise. Here is his diary-style blog on the trip;

It was my first visit to the Galapagos and I was actually quite excited, which any of my friends or family will tell you, is a rare emotion for me! I flew from Quito where on arrival at the airport I was met by a representative from the cruise ship called Tony. He showed me to where I had to have my luggage checked and gave me my TCT card which I had pre-paid. If you haven’t pre-paid this then they cost $20 and are mandatory to visit the Galapagos Islands. He took me to check in and off I flew to San Cristobal island, with a brief stop in Guayaquil to pick up extra passengers. 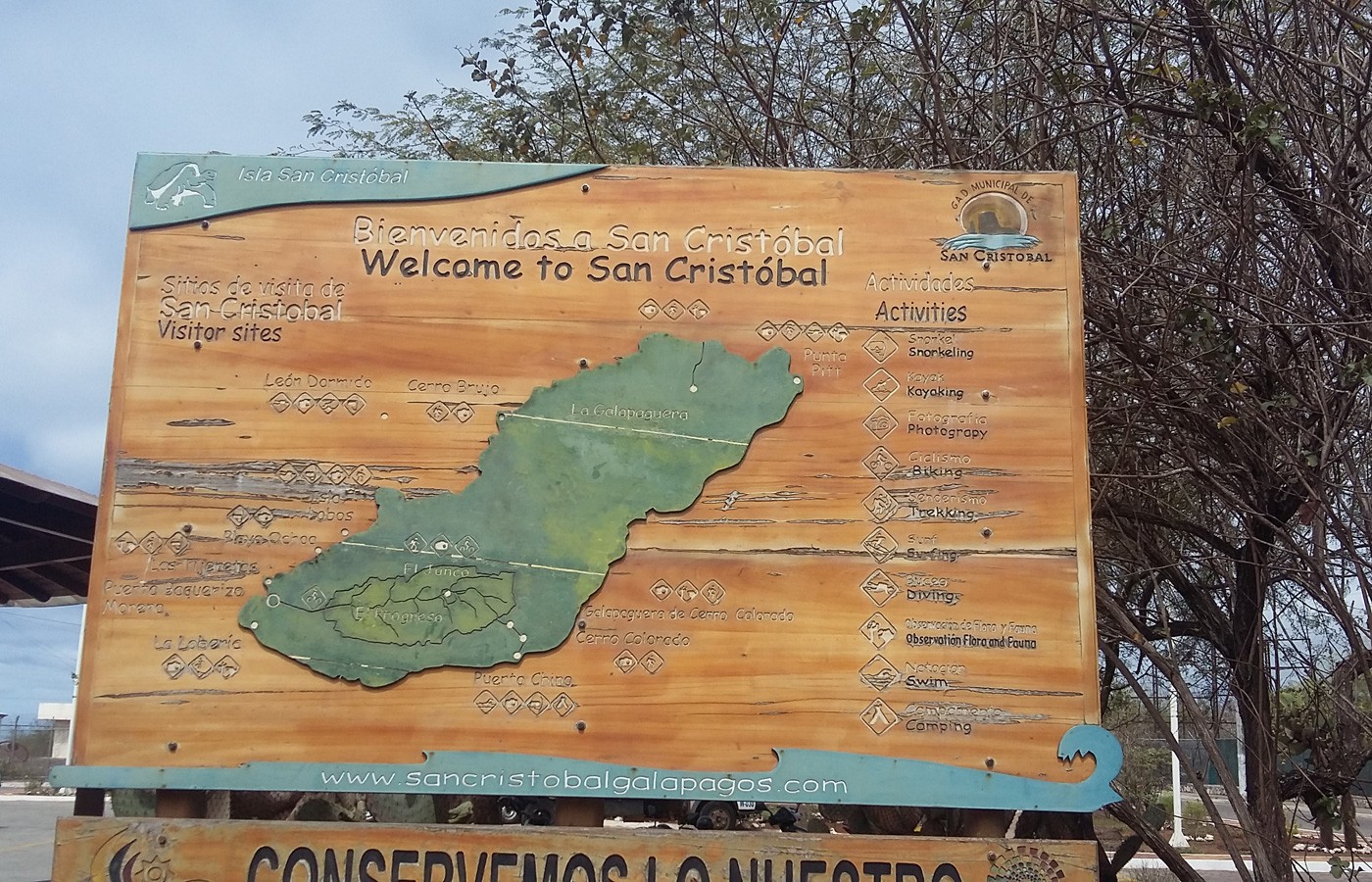 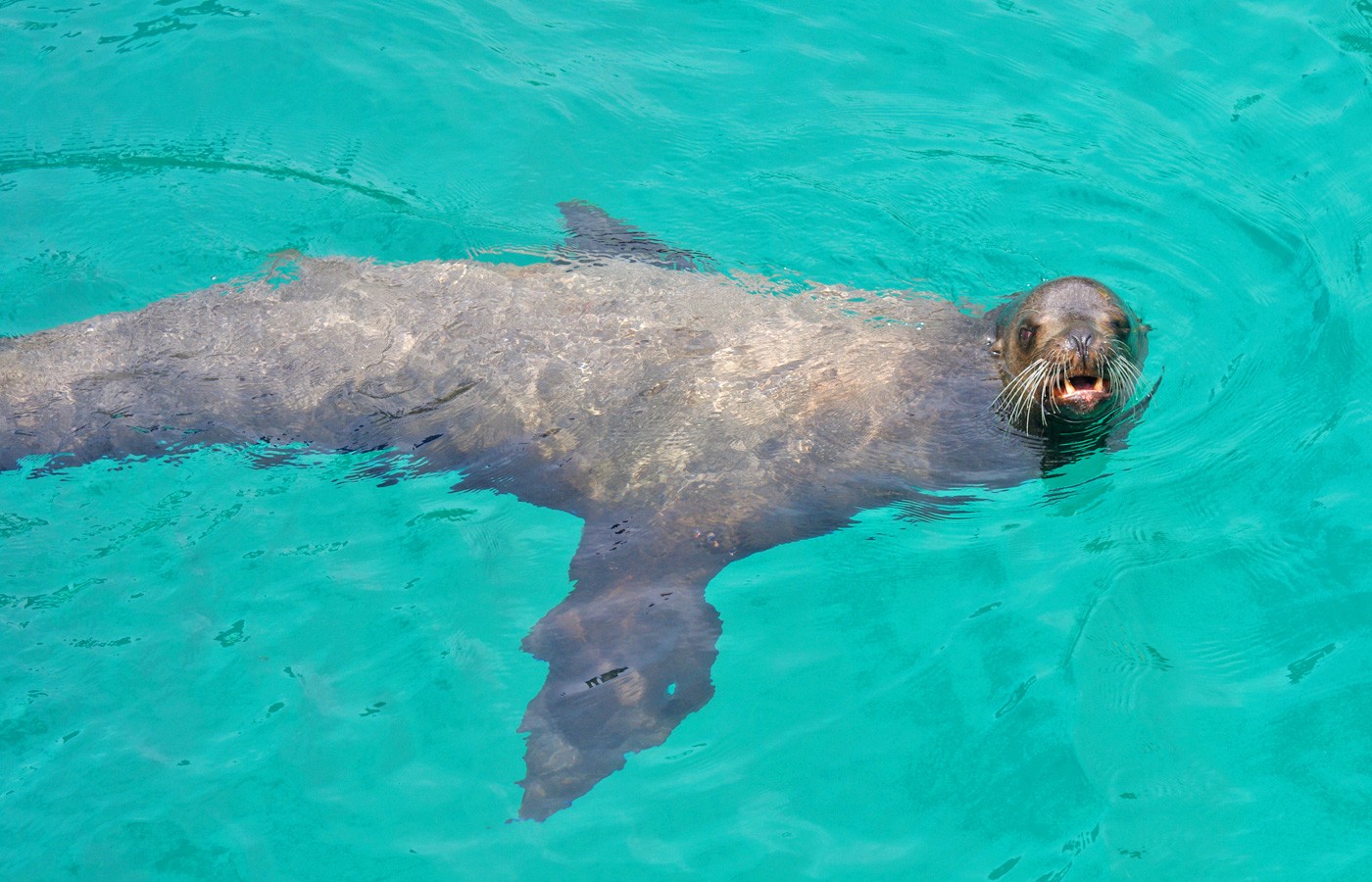 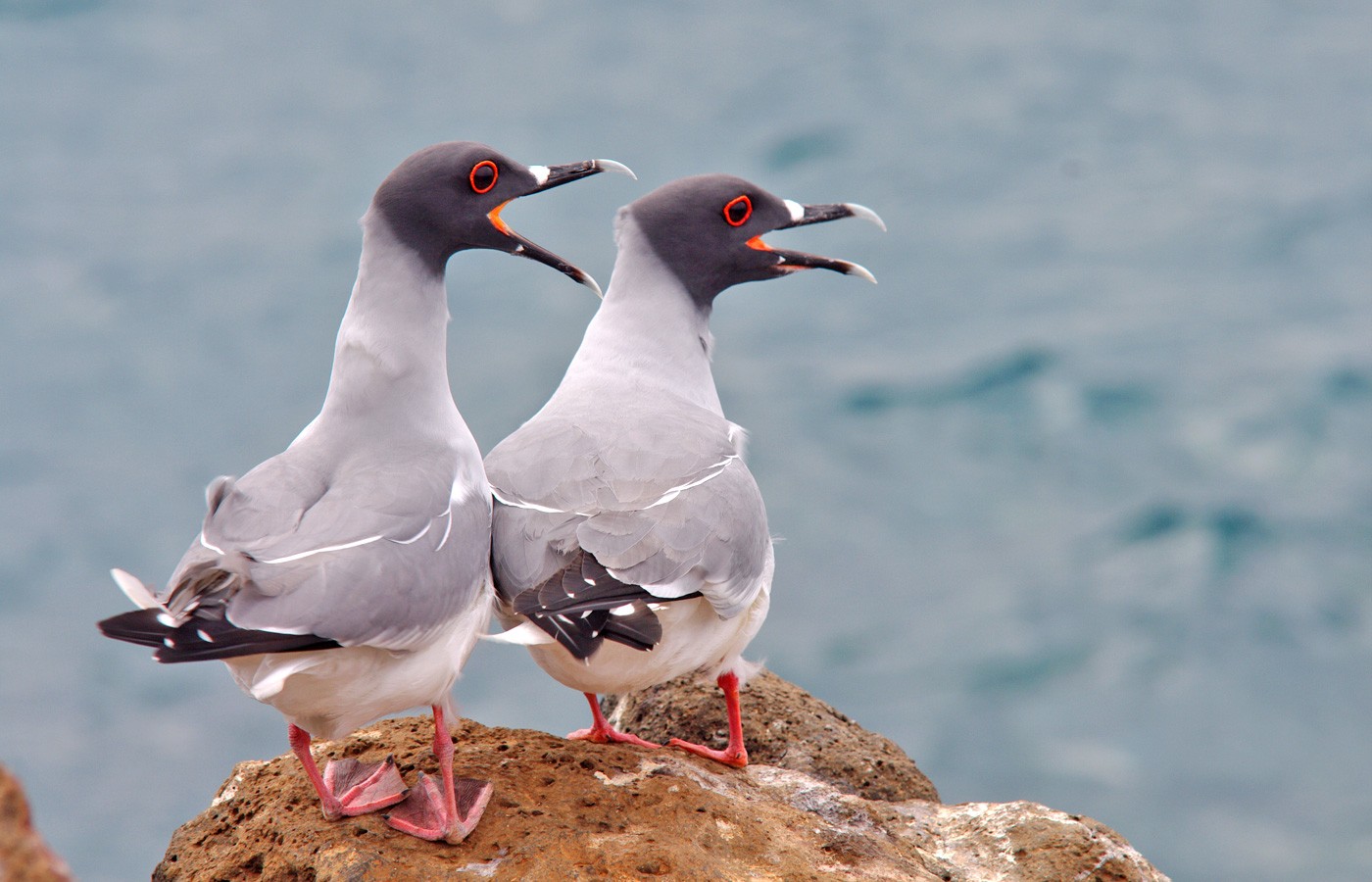 On arrival into San Cristobal you clear immigration, filling in a landing card, and then pay the $100 National Park fee. This can also be paid in advance, as as with the TCT card it is mandatory when visiting the Galapagos. After collecting my luggage I was met by a man called James who was to be our onboard naturalist guide. Once all passengers for the cruise had arrived we boarded a minivan and took a 5-minute drive to the port to board the panga’s (dinghy’s) to reach our boat, which was moored out in the harbour. Even prior to reaching the boat we encountered a number of sealions, an iguana and Sally Lightfoot crabs, all on the rocks in the harbour, while large frigate birds flew overhead. 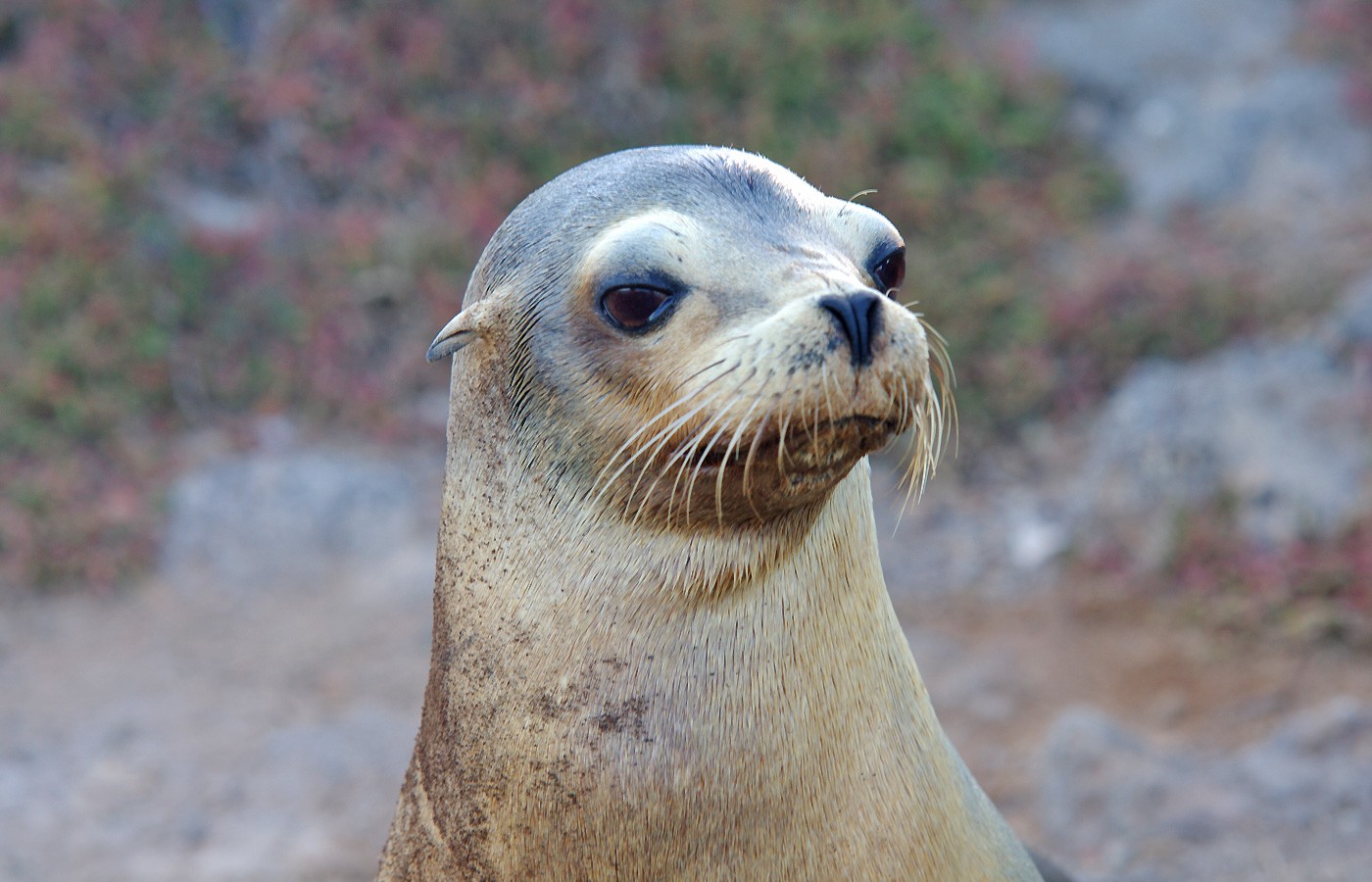 We boarded the yacht in two separate pangas and so began a 4-night / 5-day cruise on one of the newest luxury yachts in the Galapagos, the Natural Paradise. Upon boarding we were given a brief introductory chat and then shown to our cabins. I had a standard cabin on the main deck which had a large bed and good sized windows and large bathroom. For our clients I recommend the upper deck cabins which have large private balconies and are more spacious. We had a buffet lunch and then a briefing from James about the next few days before we set sail, heading for Kicker Rock. Before we reached the rock we had tried on wetsuits and flippers for the snorkelling that awaited us. We sailed around Kicker Rock, followed by six large Frigate birds and spotted a variety of other bird species around the rock, including pelicans, Nazca boobies and also two blue footed boobies. 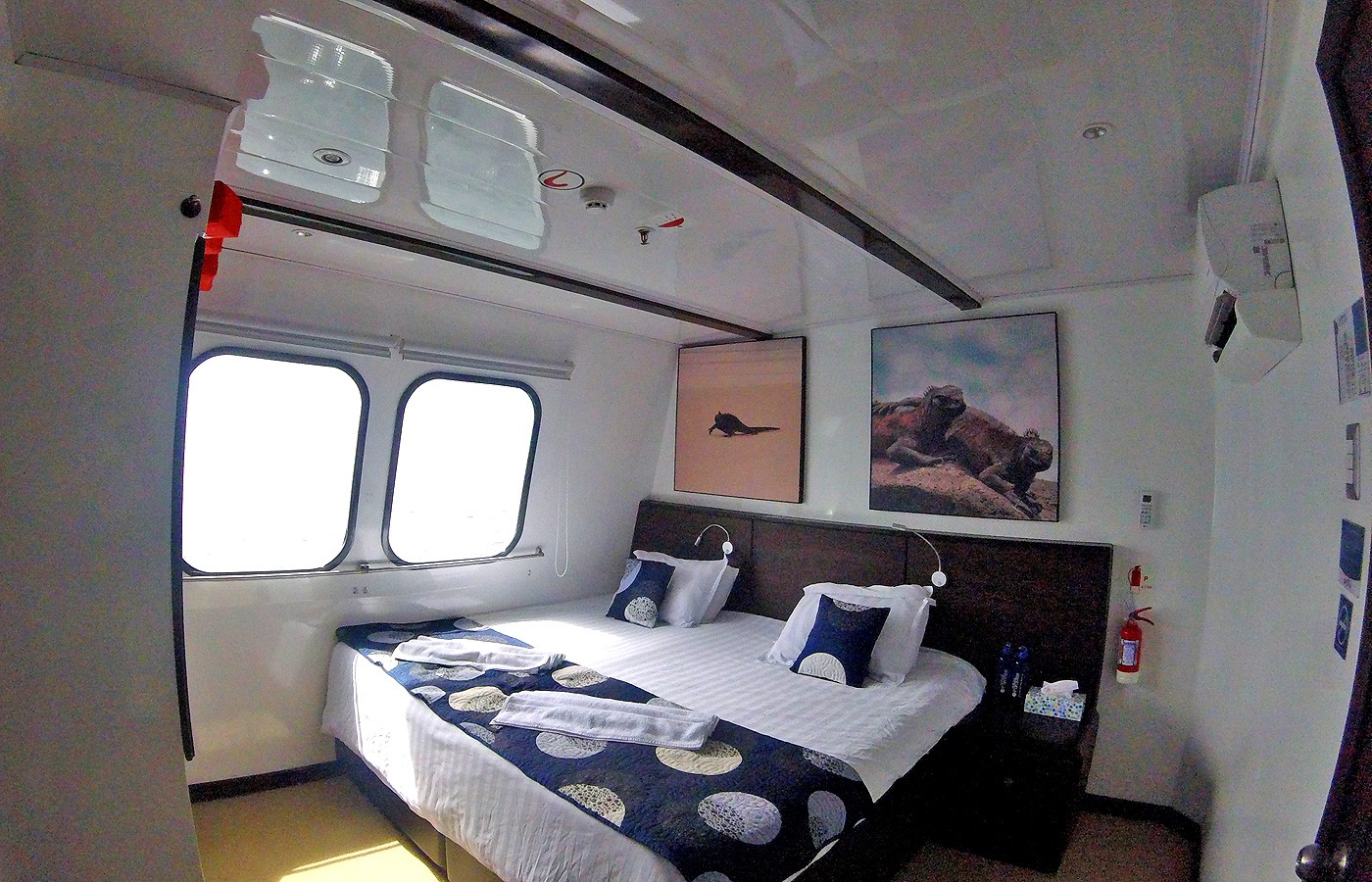 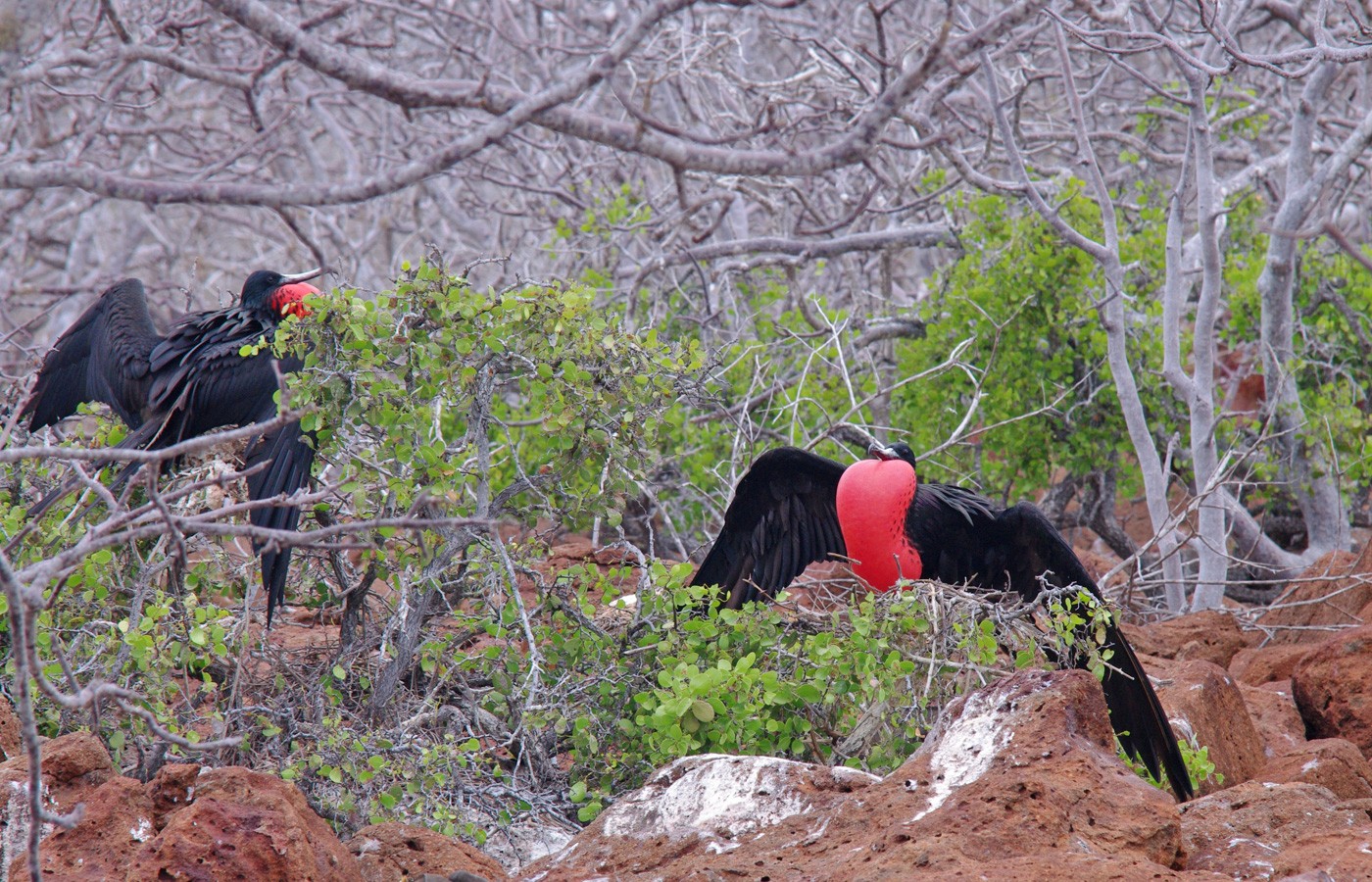 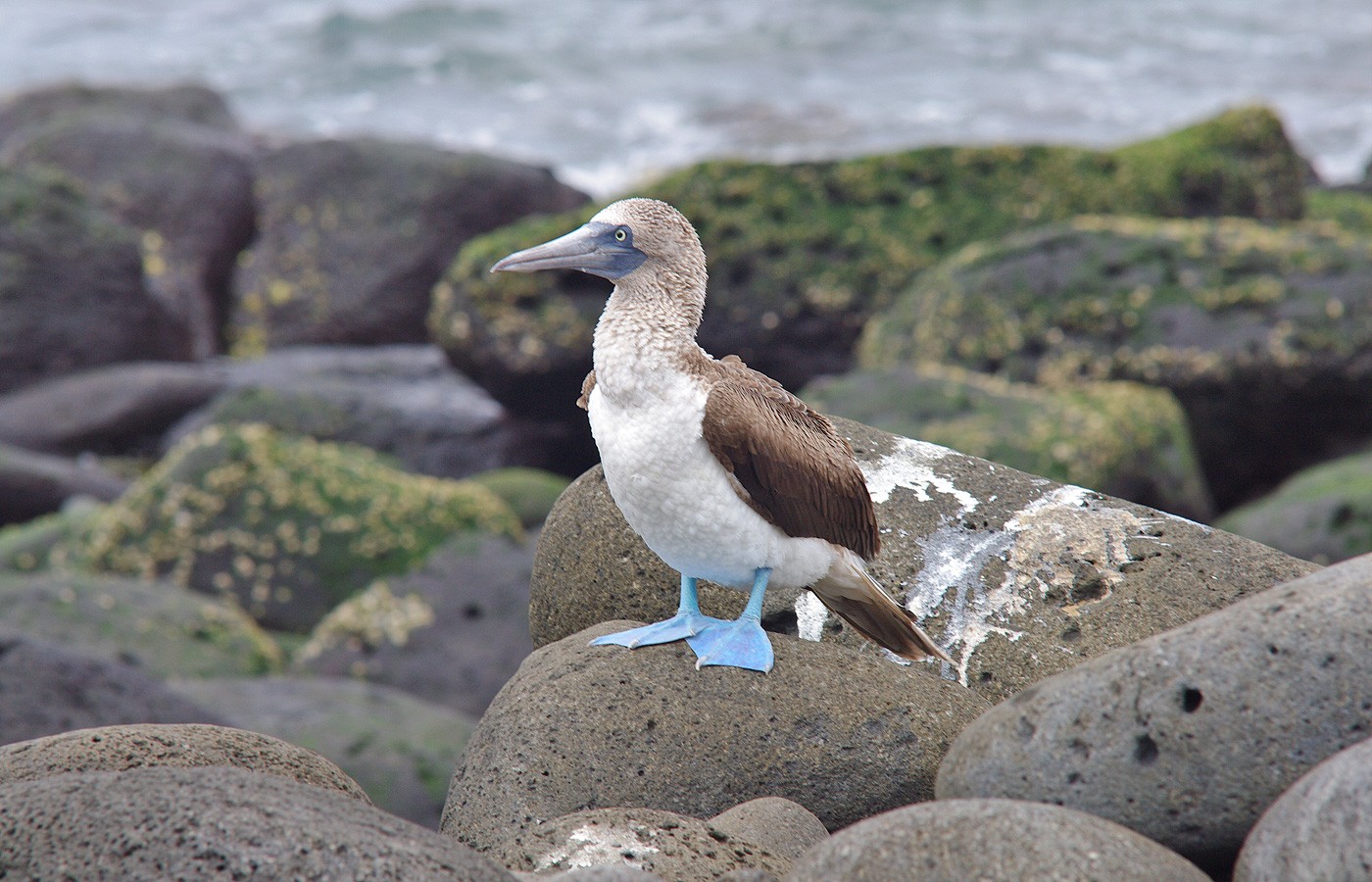 Unfortunately, the sea was a little choppy so we had to delay the snorkelling for the first day and so we headed off to drop anchor. In the evening there was a briefing by James about the following days activities and then a buffet dinner before we retired for the night, excited about what tomorrow might have in store for us.

The morning began at 7am with breakfast followed by a morning excursion to North Seymour island. This was a dry landing which essentially means that your feet stay dry. The pangas took us from the boat to the island, where we disembarked. North Seymour is covered in Palo Santo forest with a rocky interior, and immediately we spotted hundreds of Frigate birds overhead. There were lots of swallow-tailed gulls with their striking red eyes but the Frigate birds were making a show especially the males with puffing out their big red necks to lure in the females. There were lots of new born chicks too with their fluffy fur. Land and marine iguanas were aplenty and we spotted a few blue footed boobies up close as well as Nazca boobies plus various sealions which didn’t enjoy people getting too close to them. 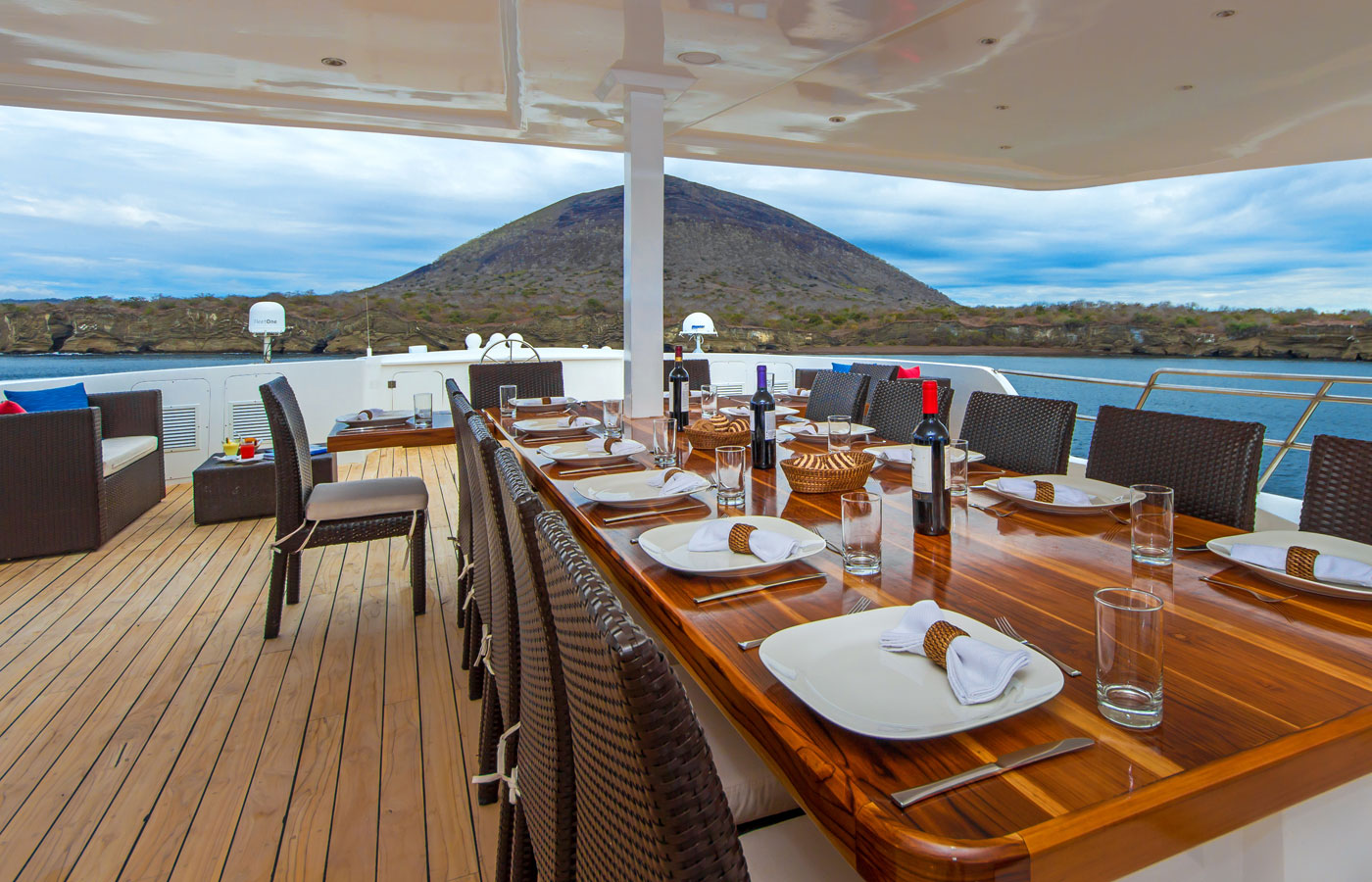 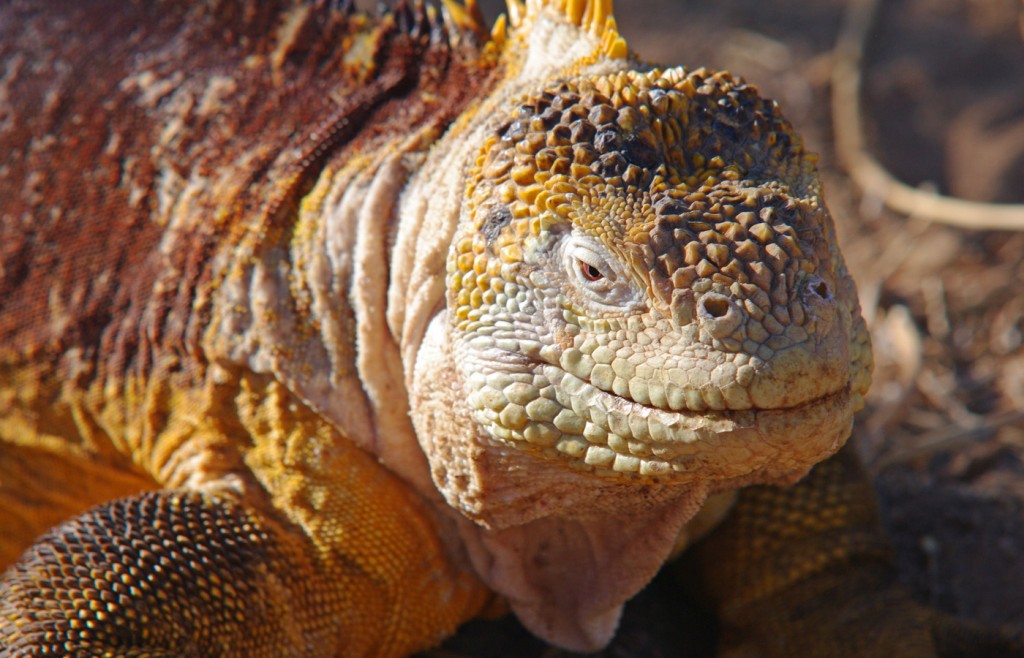 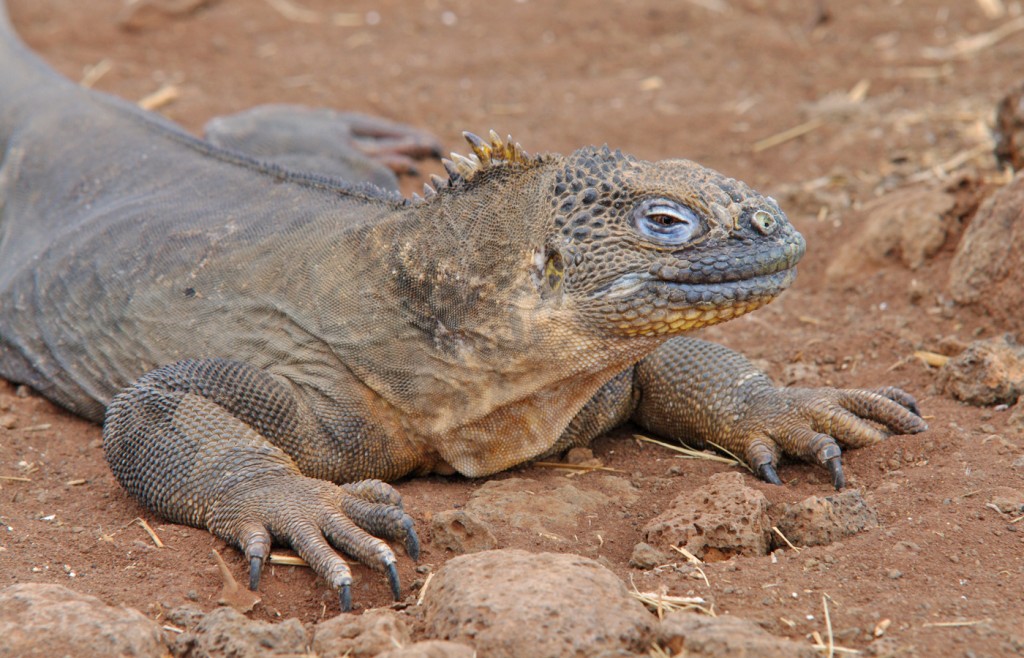 We returned to the boat to don our wetsuits and head out for some deep water snorkelling. We were taken out by panga close to the coastline of North Seymour jumped in. We spent an hour in the water and colourful fish were everywhere including the following species which I sighted.

We returned to the boat for a lunch consisting of octopus, king prawns, grouper and salad before heading to South Plaza Island in the afternoon, another dry landing. As we docked there were Galapagos sealions everywhere with lots of baby pups. Sally Lightfoot crabs covered the rocks and there were numerous land and marine iguanas too. The interior of South Plaza is covered in an Opuntia cacti forest and Portulaca, a red coloured Galapagos carpet weed, which created a striking contrast and a picturesque landscape as we followed a cliff top walk around the island where many birds nest, including gulls and pelicans.

We returned to the ship for a dinner consisting of some superb sushi and called it a night as the boat sailed on to Rabida Island.

I woke early this morning to some gorgeous early morning light as the boat arrived at Rabida Island. This was our first wet landing. A wet landing is one where you jump off the panga straight into the water so flipflops or walking sandals are advised. The most striking thing about Rabida is the colour of the beach, a rich red, caused by the iron in the ground. From the beach we spotted lots of blue footed boobies diving into the ocean for fish and hitting the water at tremendous speed. The beach was covered in small starfish and shells including hermit crab shells and the exoskeleton of the crab where the crab has grown. We hiked around Rabida Island, finding good view points, including a pool of brackish water where a posing sealion was soaking up the sun. 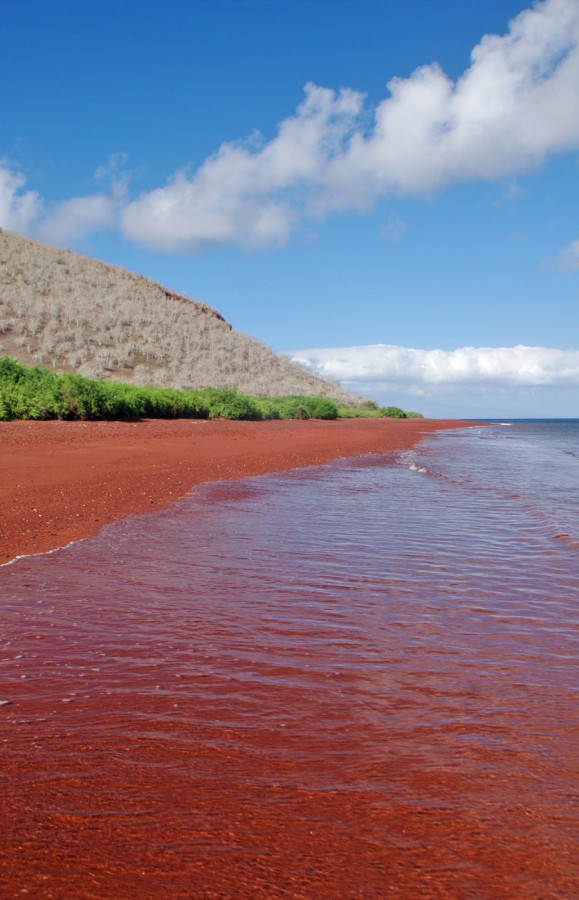 The red beach of Rabida

From Rabida beach we then had the chance to snorkel in shallower water than yesterday and encountered even more fish than yesterday.  We saw lots of similar fish but I also spotted the following;

We returned to the beach where a sealion was just coming ashore and I managed to get some good underwater footage of it playing in the water with my GoPro (see video at the end of this blog). Back on the boat we had a snack and then had the chance to either kayak or snorkel some more. I chose the latter but those who went kayaking were lucky enough to see a sea turtle as well as a penguin swimming! We had lunch back on board as the boat navigated to Bartolome Island and then the wetsuits were back on again for more snorkelling. The afternoon snorkelling session was, without doubt, the best so far. As soon as we jumped in the water we spotted a Galapagos penguin perched on the rocky bank, calling out to its three companions nearby. As we swam on there were big shoals of colourful fish of many varieties, as well as a White Tipped Reef Shark. However, the highlight of the day was coming across a Pacific green turtle which allowed us to get very close to it as it fed on the plants on the rocks, a truly exciting sight.

In addition to the other fish I spotted, I could now also add these below to the list of ones I’ve seen;

Our final trip of the day was to Bartolome Island for the climb up the 340 steps to the top. Bartolome is a extinct volcano and looks like a landscape from Mars with various rock types but lots of basalt and hardened lava, including lava tunnels. The view from the top of Bartolome is perhaps the best known in the Galapagos, that of Pinnacle Rock. The sun silhouetted the rock and that famous view was a beautiful end to the day. 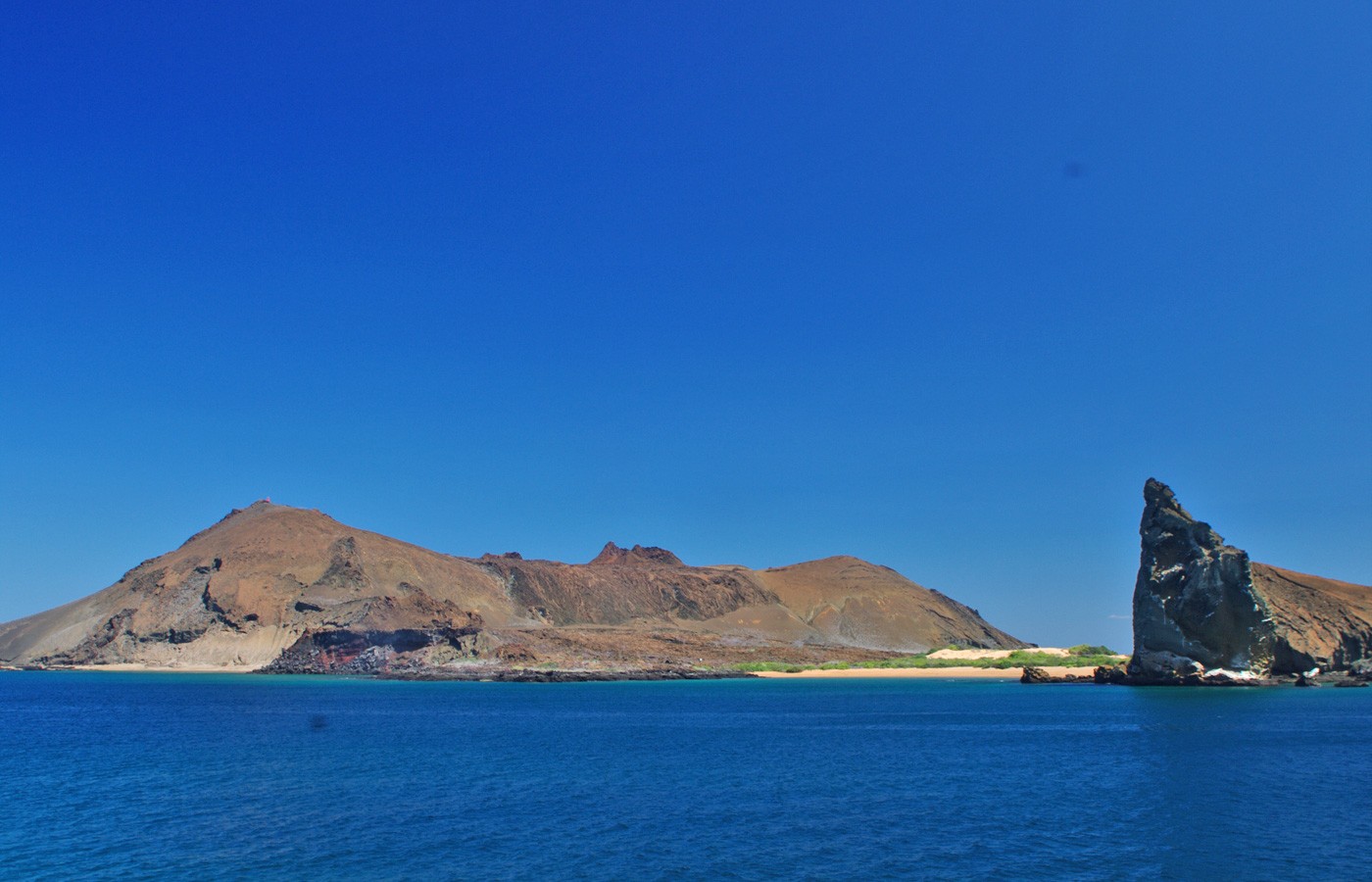 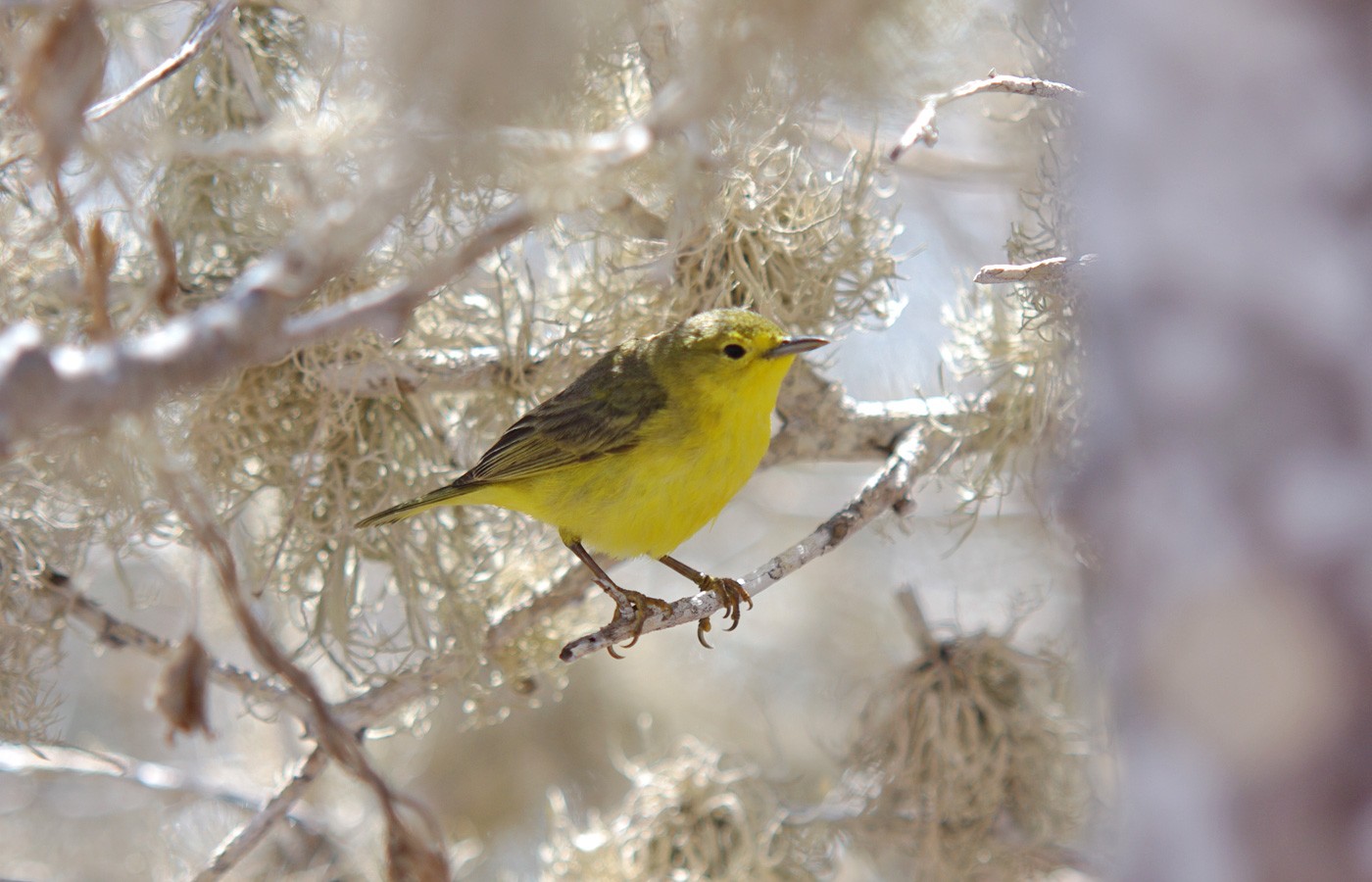 This morning we headed to Sullivan Bay on Santiago Island for a dry landing. Santiago is covered in lava from a volcanic eruption, 120 years ago. As we landed we could see numerous Sally Lightfoot crabs which, with their bright red and yellow markings, stood out against the dark volcanic rock. We followed a trail around the island, climbing over the various types of lava, which is now hard and crusty, peering into the crevasses and lava tunnels. 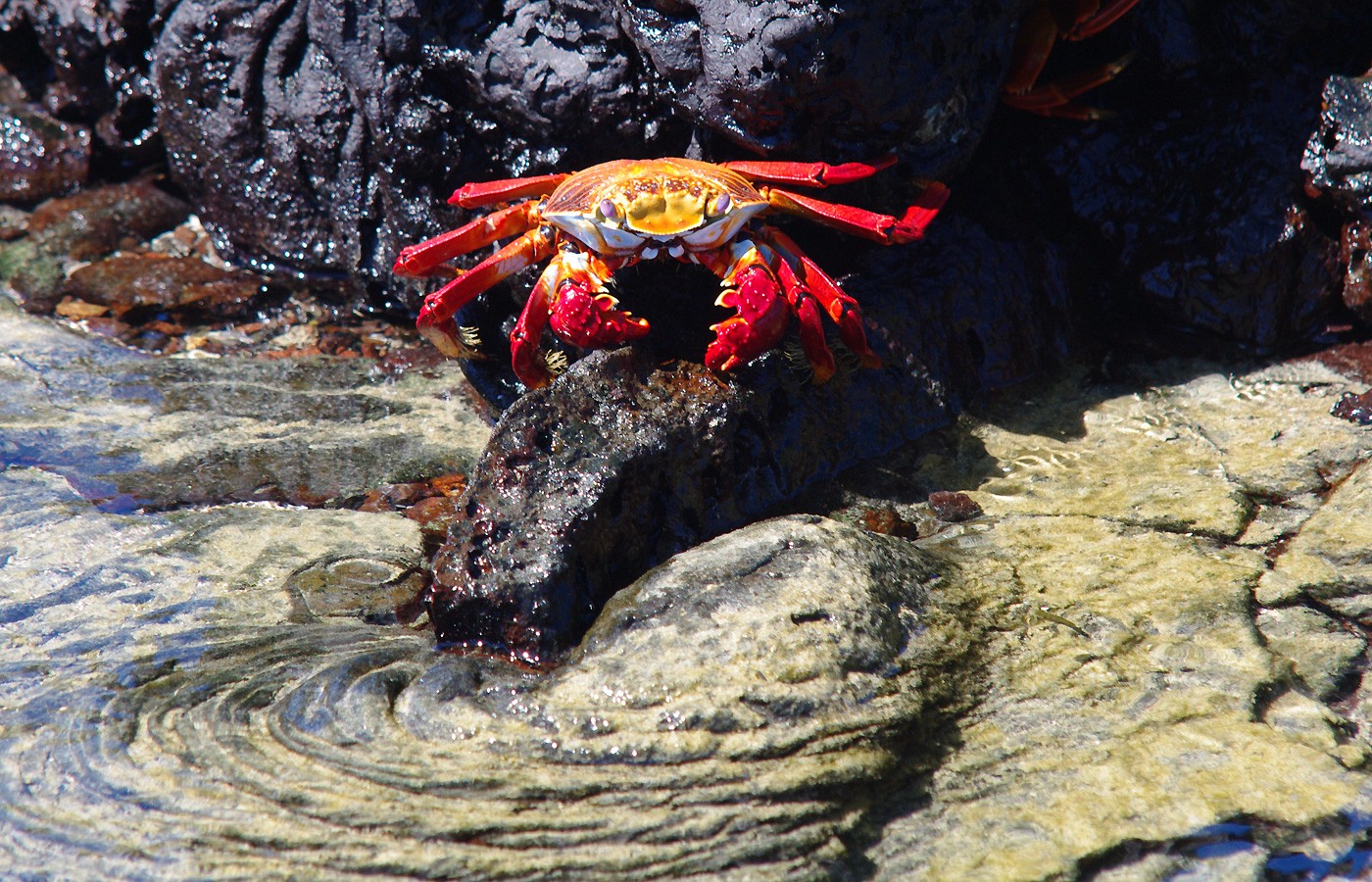 We came back on board to get our wetsuits on and back into the water we went for our last snorkelling adventure. We spent an hour snorkelling in Sullivan Bay and almost immediately we saw a green turtle swimming below us, almost immediately followed by a Galapagos penguin shooting past us. Colourful fish were again aplenty, but the highlight for me was to spot a marine iguana swimming which I managed to follow for a few minutes underwater until it jumped onto the rock and started eating algae.

In addition to the other fish I spotted, I could now also add these species;

We returned to the boat for lunch and while we ate, the boat relocated to Santa Cruz island for our next adventure, a visit to Dragon Rock. The area is famous for flamingos however we were not lucky enough to see any. We did spot lots of land and marine iguanas and could get very close up. My favourite sight was as we were just about to return to the boat when I spotted a Sally Lightfoot crab appearing to tickle a Marine iguana under the chin! As we returned to the boat, the crew set sail for Puerto Ayora, on Santa Cruz Island, where we anchored for the night and that was the end of my incredible Galapagos adventure. The following morning we took pangas to the dock at Puerto Ayora from where we boarded a minibus to the Canal de Itabaca and here a boat takes visitors across the short stretch of water and onto Baltra Island where another bus took me to the airport for a flight back to the mainland. 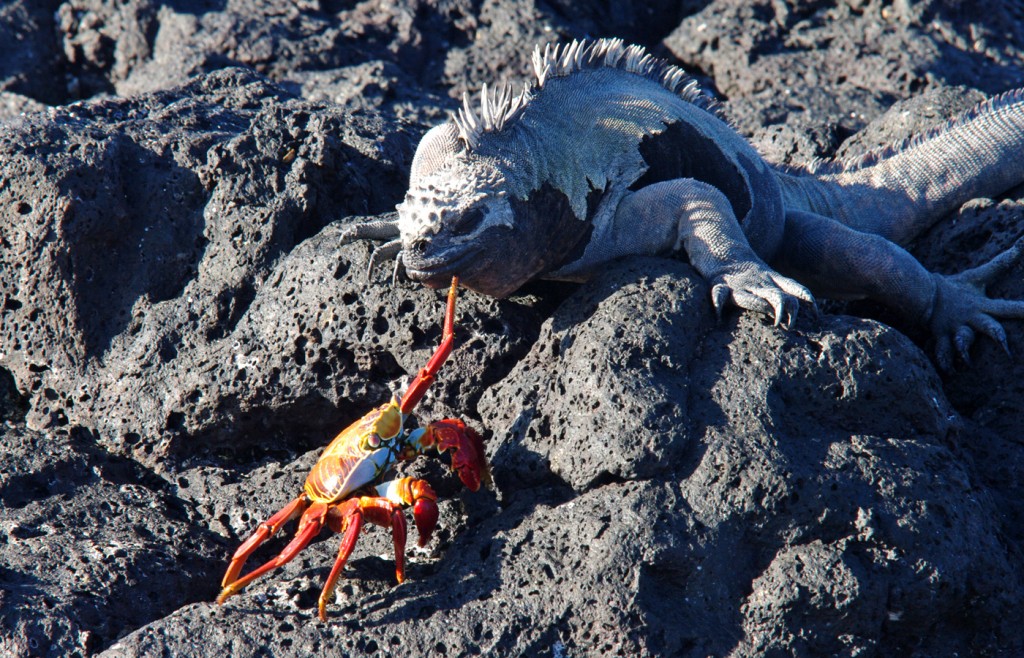 A Sally Lightfoot crab tickling the chin of a marine iguana! 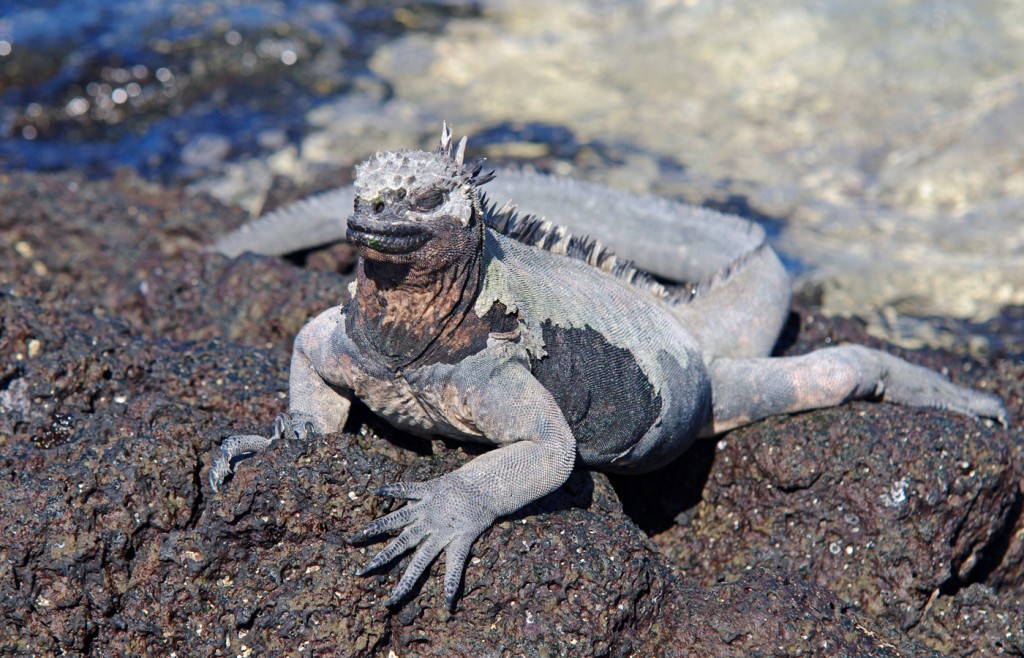 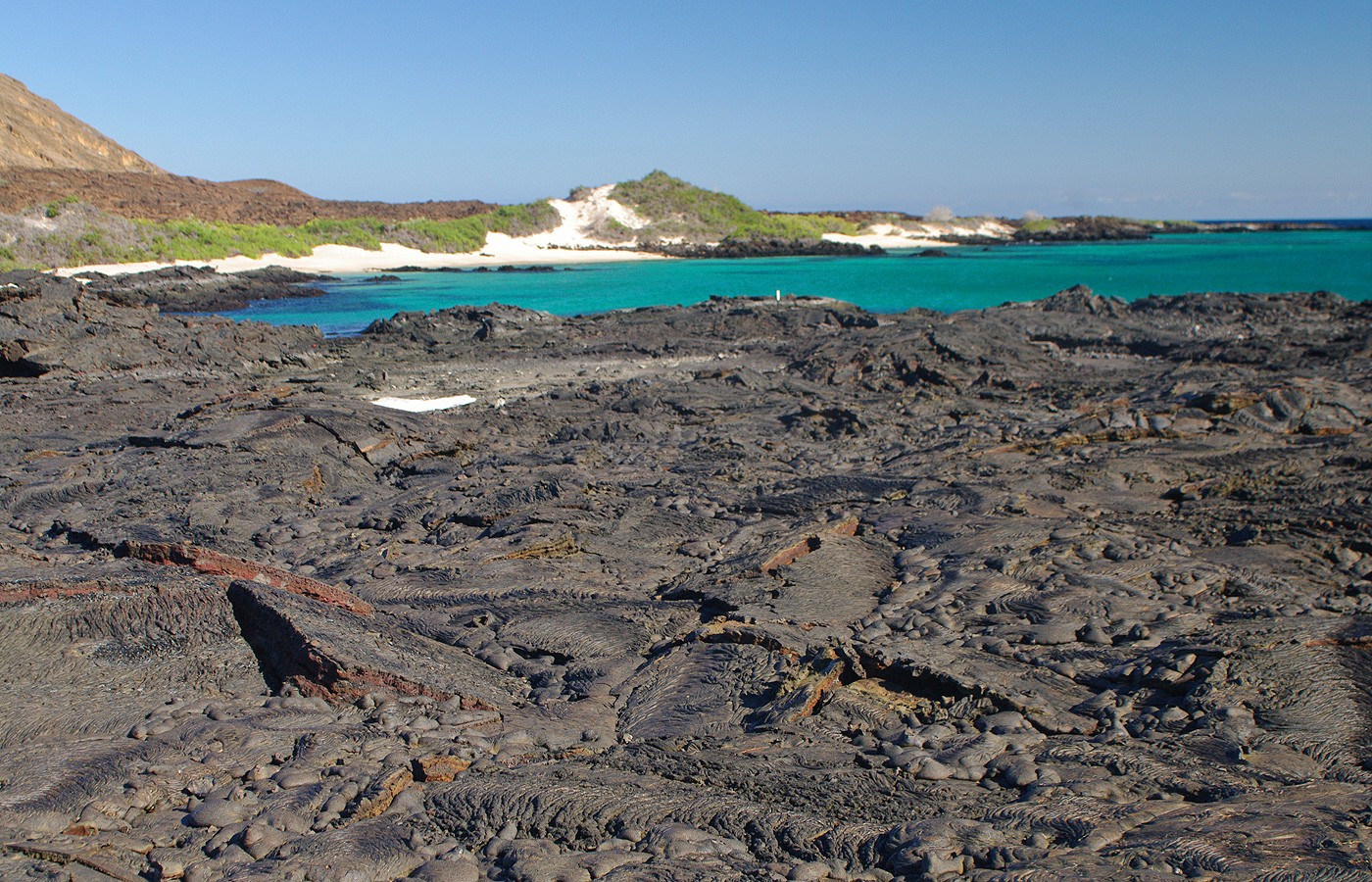 The Natural Paradise was an excellent choice for the cruise. The boat is small and sturdy and didn’t roll around too much, although there was one bumpy evening as we sailed across the open seas. The guide and crew were excellent with a total of 11 crew to the maximum of 16 guests – a very good ratio. Dinner was served as a buffet for all meals and we dined at two 8-seater tables. The cabins are spacious, with big bathrooms for a cruise ship and have very comfy beds. The photos of local wildlife on the walls is a nice touch too.

If there was one thing I’d advise clients to do prior to coming to the Galapagos, it’s to try out snorkelling if you’ve never done it before, so you are a little confident in the water. There’s usually a snorkelling trip every day and you really benefit from being comfortable in the sea.

For young or old, the Galapagos is a truly wonderful adventure.

To see more of Simon’s adventure, take a look at the footage from his trip;