The Ultimate Guide to the Galapagos Islands

THE ULTIMATE GUIDE TO THE GALAPAGOS ISLANDS

If you’ve ever made a travel bucket list, chances are the Galapagos Islands are on it. With turquoise waters fringed with white sandy beaches, spectacular wildlife and world-class scuba diving opportunities; these magical islands are a paradise in more ways than one. 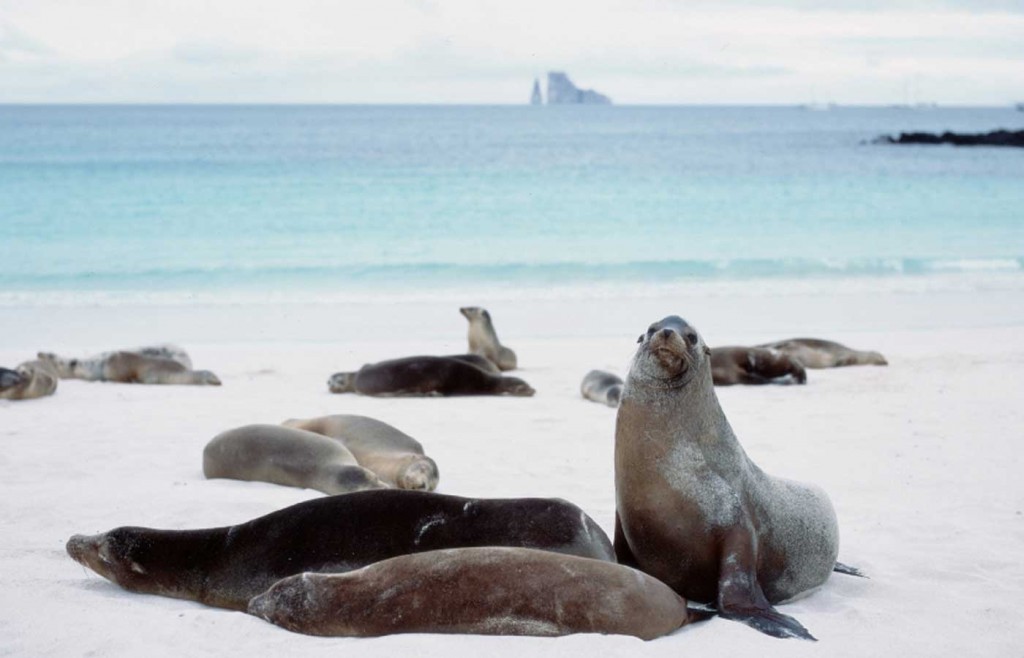 Sealions lazing on a white sandy beach, with Kicker Rock in the background.

Located along the equator, almost 600 miles off the coast of Ecuador, the islands are a vast archipelago of volcanic outcrops. Most famous for it’s magical wildlife encounters, this holiday destination is one you won’t forget. By far, the best way to get the most out of any visit to the islands is to enjoy a cruise between the most popular areas to witness the diversity of this remote wilderness. There are other options, including luxury hotels and tented safari-style camps, but the freedom that a boat brings is hard to match. There are many questions surrounding a visit to this remote wilderness, so we have compiled this guide as a resource for anyone wishing to visit…

There are 18 islands which are classed as ‘major islands’ and can be further broken down into a list of 14 isles that are the main focus of any trip. Many have their own endemic species of plants, animals and birds, and travellers must choose wisely when picking which islands to visit.

This is the main start and finish point for most trips to the Galapagos due to the San Cristobal airport. It has a small port town called Puerto Baquerizo Moreno, which is a quaint little place to take a stroll. The island also has the Interpretation Centre – an interesting museum with displays and exhibits that teach visitors all about the Galapagos history, nature and human impact. Just 1.5km offshore lies Kicker Rock – a startling formation which rises steeply from the sea.

This small island is a paradise for birdwatchers as many different species can be spotted. It also boasts ‘Gardner Bay’ – an idyllic white sandy beach on which sleeping sealions can often be found. 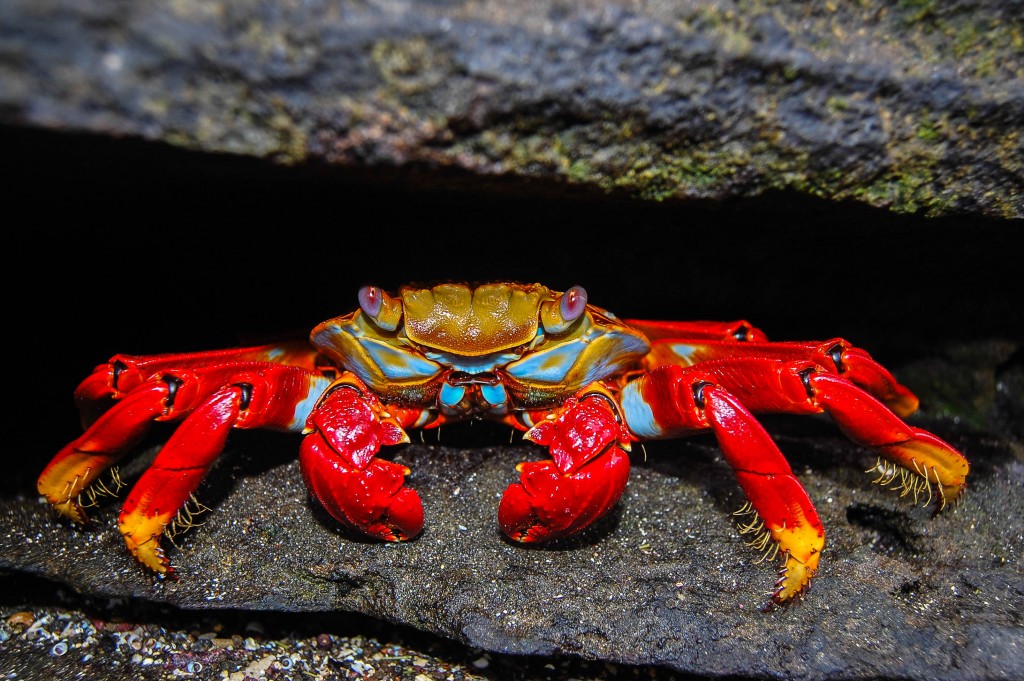 Sally Lightfoot crabs are a common sight on the beaches of the Galapagos Islands.

This tiny island is only included in longer tours of the islands due to its remote location – it may also be because of this that it has lots of birds which call it home. It has a hiking trail which is popular with tourists who venture this far, called ‘Prince Phillip’s Steps’ plus a wide inlet known as ‘Darwin Bay’.

Just 24 square kilometres in size and with a ambundance of pricky pear cacti, Santa Fe is a popular stop off point for trips around the islands.

This small strip of land is popular with tourists who enjoy extraordinary flora. At different times of the year the colours can change from red, to purple and to green.

Santa Cruz has a large city, Puerto Ayora, which is a colourful place filled with shops and restaurants along with a selection of hotels. The island is also home to the Charles Darwin Research Station – which plays an important role in the preservation of the islands – plus Los Gemelos (The Twins) which are two large sinkholes, lava tubes through which visitors can walk and the Cerro Dragon (Dragon Hill) viewpoint. 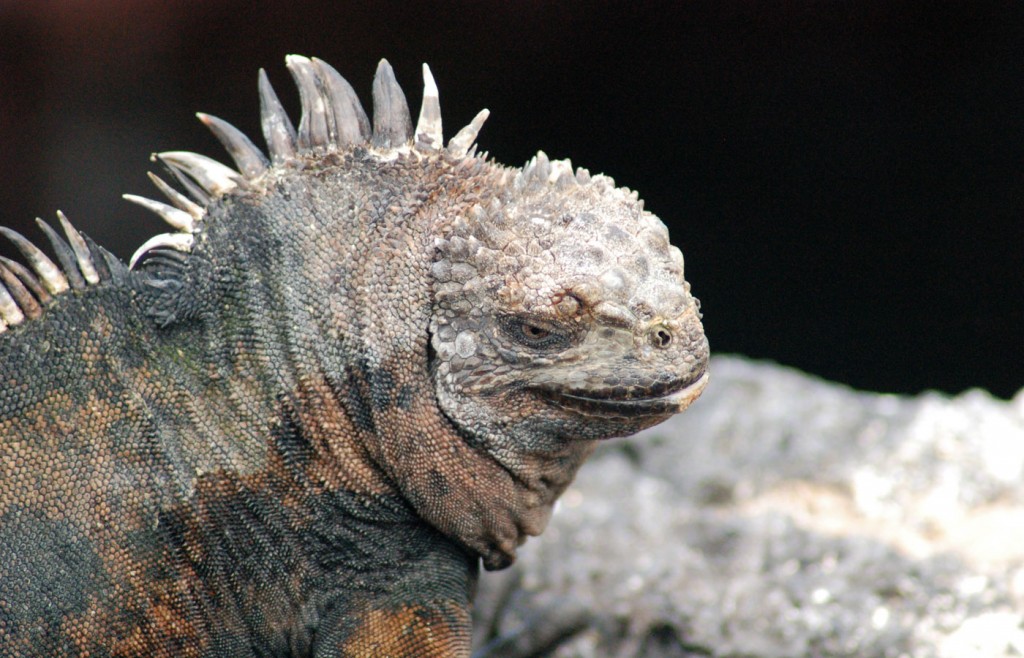 Marine iguanas are the only lizard in the world which regularly swim and graze underwater.

This island is another popular start and finish point for trips in Galapagos due to the Baltra airport situated here. It is sometimes called South Seymour island, and it is a barren arid island with many prickly pear cacti growing across it.

This small island is an exceptionally busy place in the breeding season when hundreds of blue footed boobies and frigate birds nest here.

This small island in the south of the archipelago was the first to be inhabited. It is now home to just 100 people, and is most famous for its popular tourist attractiion; Post Office Bay. In the bay there is a large barrel where pirates, whalers and other sailors would leave letters in the hope that someone else who passed this way could take it to its destination. To this day the barrel is still in operation and visitors to this unique place can leave postcards or letters and help deliver other peoples post. This island is also close to some spectacular diving sites.

This tiny speck of land of less than 1km in size is so named because of its similarity to (you guessed it) a traditional Chinese hat. It is in fact the tip of a volcano which spreads below the ocean surface, and is home to sealions and marine iguanas which cover the volcanic landscape. It is a great area for snorkelling.

The fabulous Pinnacle Rock forms part of this island, and visitors can walk a thigh-burning 372 steps up a wooden walkway to reach the top of an extint volcano. There are sweeping valleys of volcanic rock and dramatic views from almost every angle. 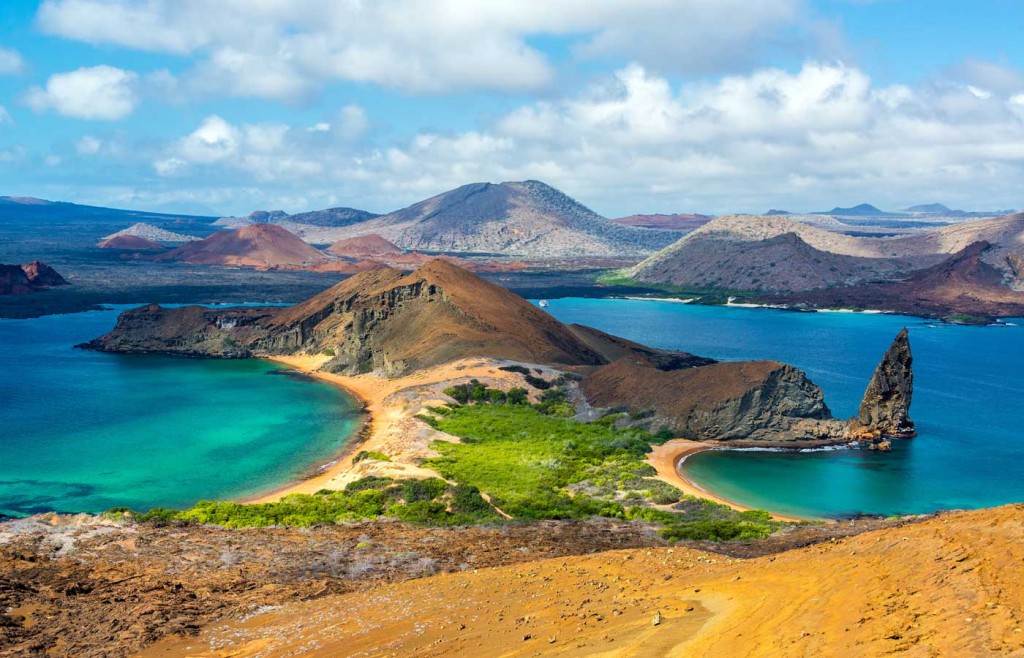 Pinnacle Rock is at the center of the iconic Galapagos landscapes.

Also known as ‘James Island’, this is a fantastic island from which to snorkel. The island has an interesting history as it was the main base for pirates and buccaneers to stock up on fresh water and food.

Six volcanoes that have joined together over thousands of years make the largest island in the Galapagos – Isabela. It has a large town by the name of Puerto Villamil which housed prisoners in a penal colony back in the mid 20th century. Nowadays it is a starting point for trips around the island such as dinghy rides to see penguins, hiking trails to nearby lakes and mountain biking excursions. With varied wildlife, an interesting history and magnificent scenery, this island is an excellent choice for visitors.

The most westerly located island in the whole archipelago, Fernandina is also one of the best for wildlife encounters. It is also the youngest island, at just a mere 1 million years old, with volcanic activity still being recorded. It has vast swathes of solidified lava which is a fascinating sight to see.

When Charles Darwin landed on the islands in 1845, he changed the course of history and our understanding of the natural world forever. His observations of the wildlife, and the differences between the species from each individual island, is what inspired his iconic book ‘The Origin of Species’. But Darwin wasn’t the only person to have an impact on these beautiful islands, over the years what began as a much needed layover for whalers, pirates, buccaneers and sailors, has played host to a number of explorers and settlers from all over the world. The islands were discovered by accident in 1535, when Tomás de Berlanga, the first Bishop of Panama was blown off course whilst sailing to Peru. The islands were first chartered on a map in 1570 and were widely known as the ‘Islands of Tortoises’ – in fact the word ‘Galapagos’ is old Spanish for ‘saddle’ which is what many visitors to the islands called these magnificent creatures and the name stuck. Ecuador claimed the rights to the islands in 1832, and since then the islands have been a growing destination for tourists, scientists, biologists and mariners. In recent years, the islands have become protected, and were the first ever declared UNESCO World Heritage site. 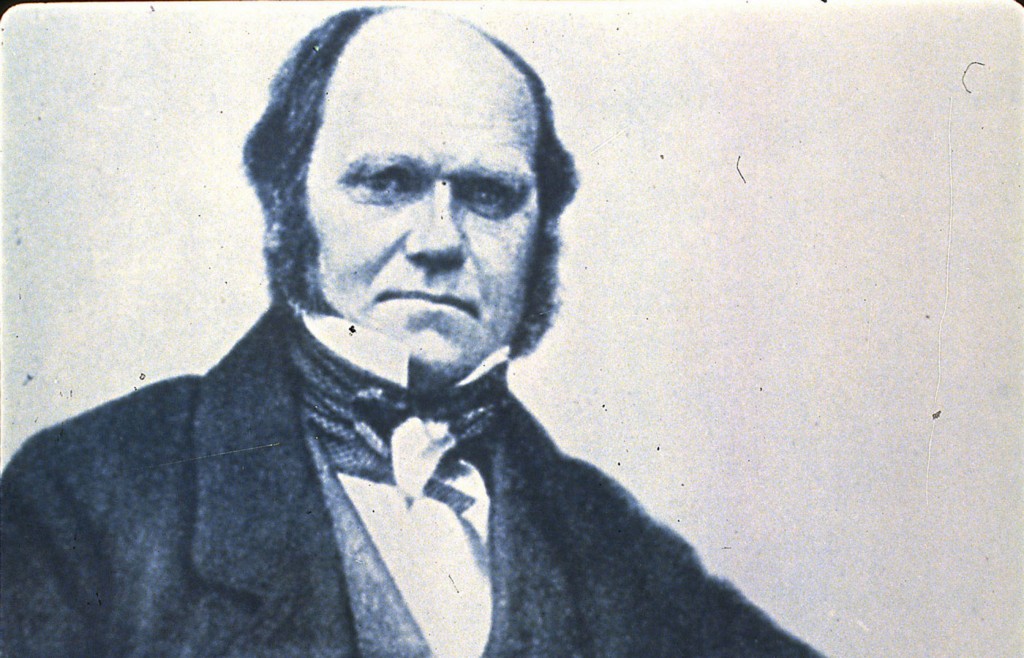 A young Charles Darwin was mesmerized by the Galapagos Islands

With the air, land and sea all swarming with wildlife, it’s no wonder that visitors to the Galapagos Islands can now enjoy ticking off the ‘Big 15’. This hit-list of the most iconic species, similar to the ‘Big 5’ that is found throughout Africa, is made up of birds, reptiles and mammals, many of which are endemic; 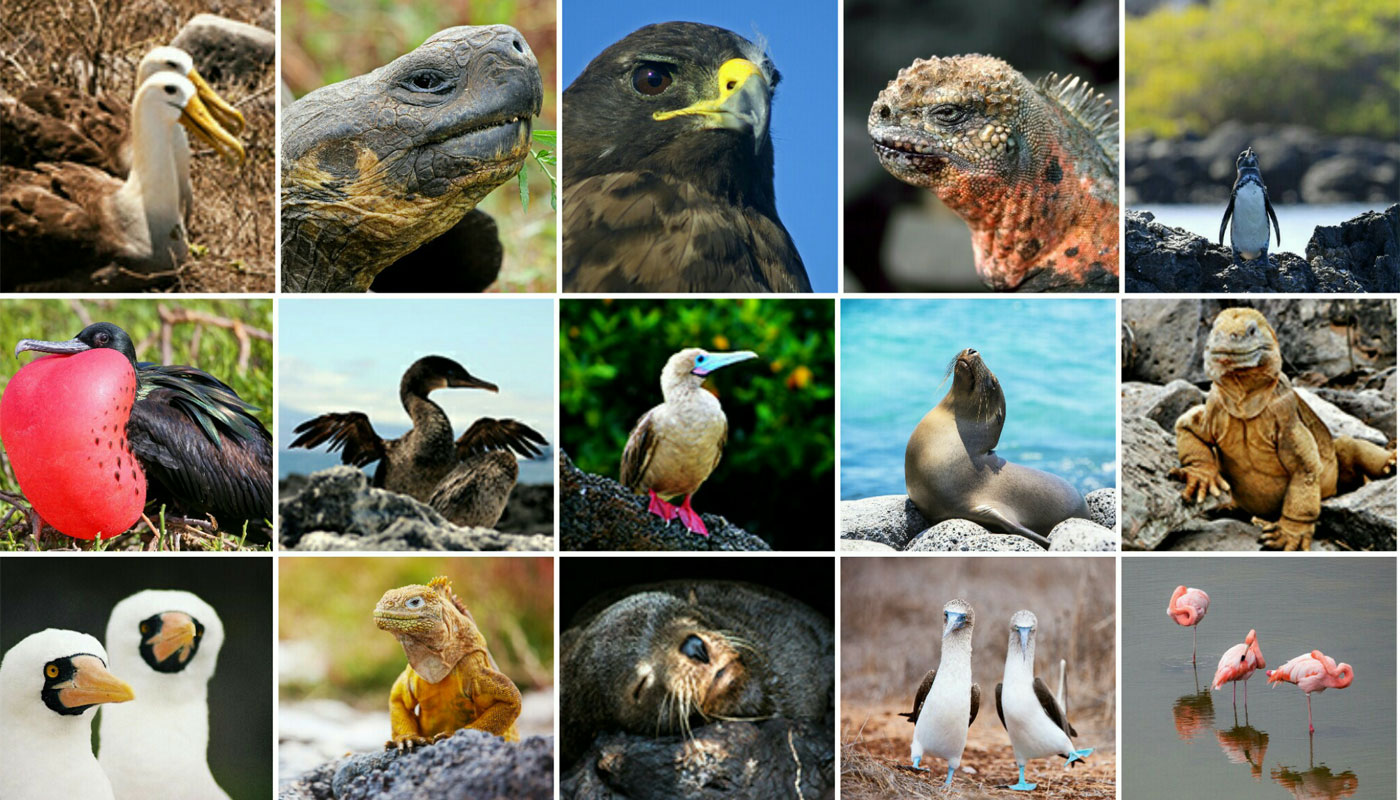 Aside from the obvious activity of just sitting back and observing the wildlife, the islands have a surprising amount of other options for those wanting more… 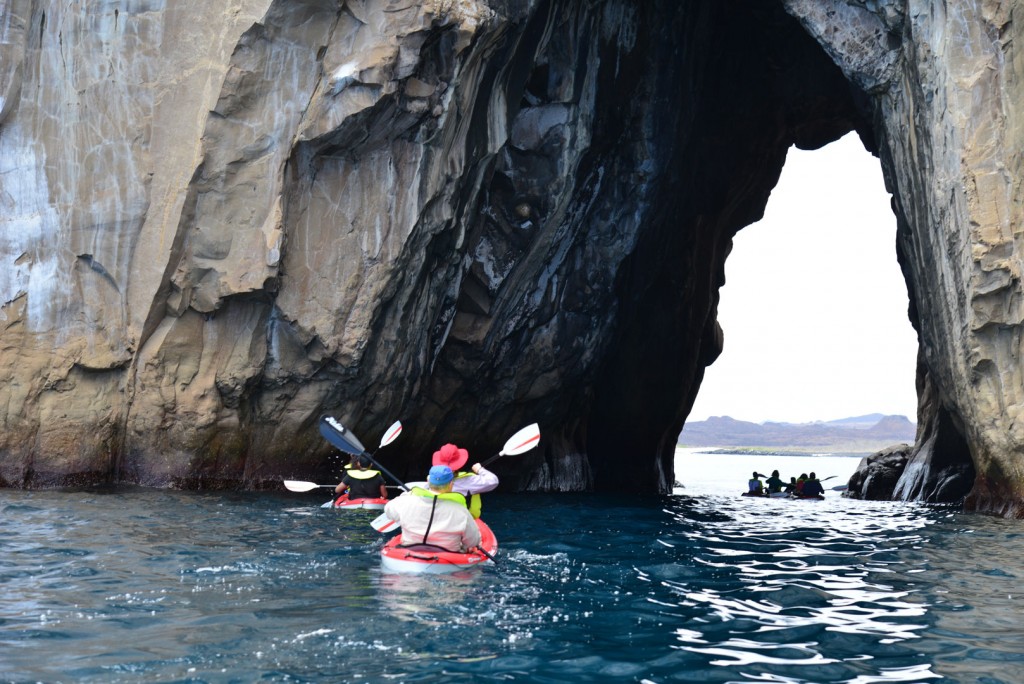 Kayaking in the Galapagos Islands gives visitors a unique perspective of this beautiful archipelago.

Snorkelling & Scuba Diving: The sea itself offers spectacular world-class diving and opportunity to spot some serious tick-list species such as whale shark, humpback whale, manta ray, green turtle and huge schools of hammerhead shark. Other sea life that can be spotted include eagle ray, stingray, white-tipped reef shark, moray eel, various crustaceans and octopi. There are colourful fish including king angel fish, parrot fish and grouper, and if you are lucky, you may get a visit from a cheeky sealion or two.

Mountain Biking: Trips across the unusual landscapes can be arranged on some islands, but not all. There are some fantastic routes on Isabela across solidified volcanic rock.

Hiking: The most popular route to walk is known as ‘Prince Phillip’s Steps; on Isla Genovesa, but there are many other routes across the archipelago. Most cruises will anchor and then take passengers on short trips by land to view wildlife.

Kayaking: A fantastic way to see the wildlife at close quarters. Many yachts and catamarans have them on board for passenger use, or they are available to rent in the bigger towns or from hotels.

CLIMATE & WHEN TO GO

The Galapagos are a subtropical year-round destination, temperatures on average range from 21°C – 30°C. However, there are two defining seasons;

January – May: This is classed as the wet season, or low season, and it also the hottest part of the year. Winds slacken and the seas are generally calmer. The increased temperature of the sea makes this time of year ideal for snorkelling.

June – December: This is the dry season, also known as the high season. The Humbolt current brings cooler waters to the islands, and this is also the time when wildlife is at its most active. This is the best time of year for scuba diving. 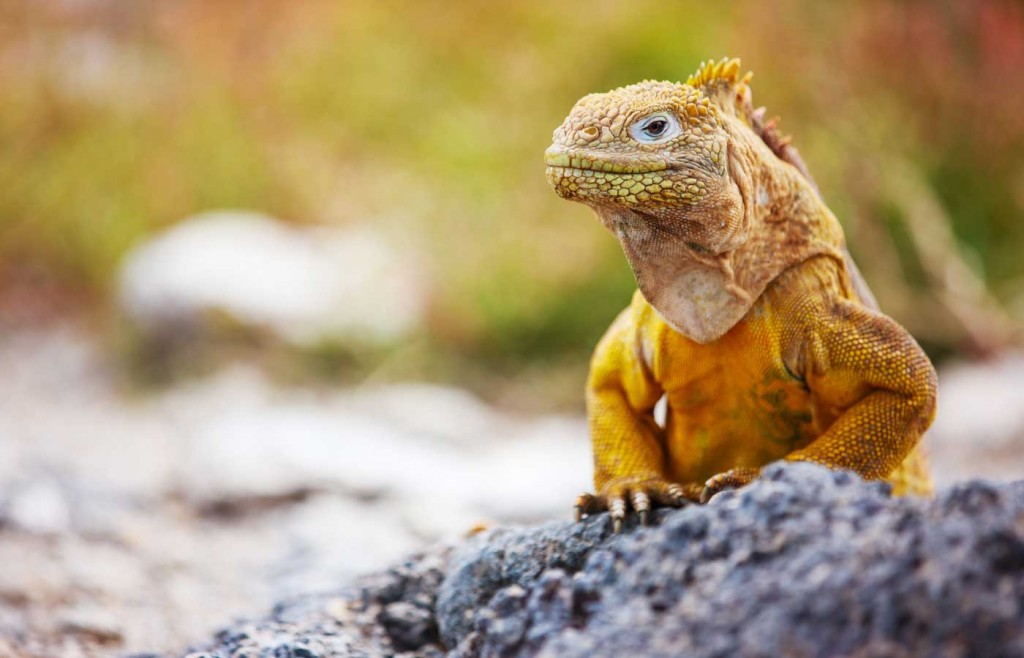 A land iguana watches over his island home.

The Galapagos is a protected National Park and there are strict measures in place to protect this special environment. Chartered boats are bound by strict regulations on where they can sail, where they can anchor and for how long. These rules to protect the islands are the main factor in routes that are sold. It is important that any visitors observe the regulations in place and respect this unique environment.

In addition, every visitor to the island must pay a National Park entrance fee;

From boutique tented camps to swanky hotels and a vast array of luxury yachts and catamarans, there are accommodations choices to suit all type of traveller. Cruises range from 4 or 5 nights up to two weeks, with full board meals and all activities included, and many visit multiple islands allowing maximum wildlife spotting opportunities. For those with weak sea legs, the hotels offer excursions on both land and sea. 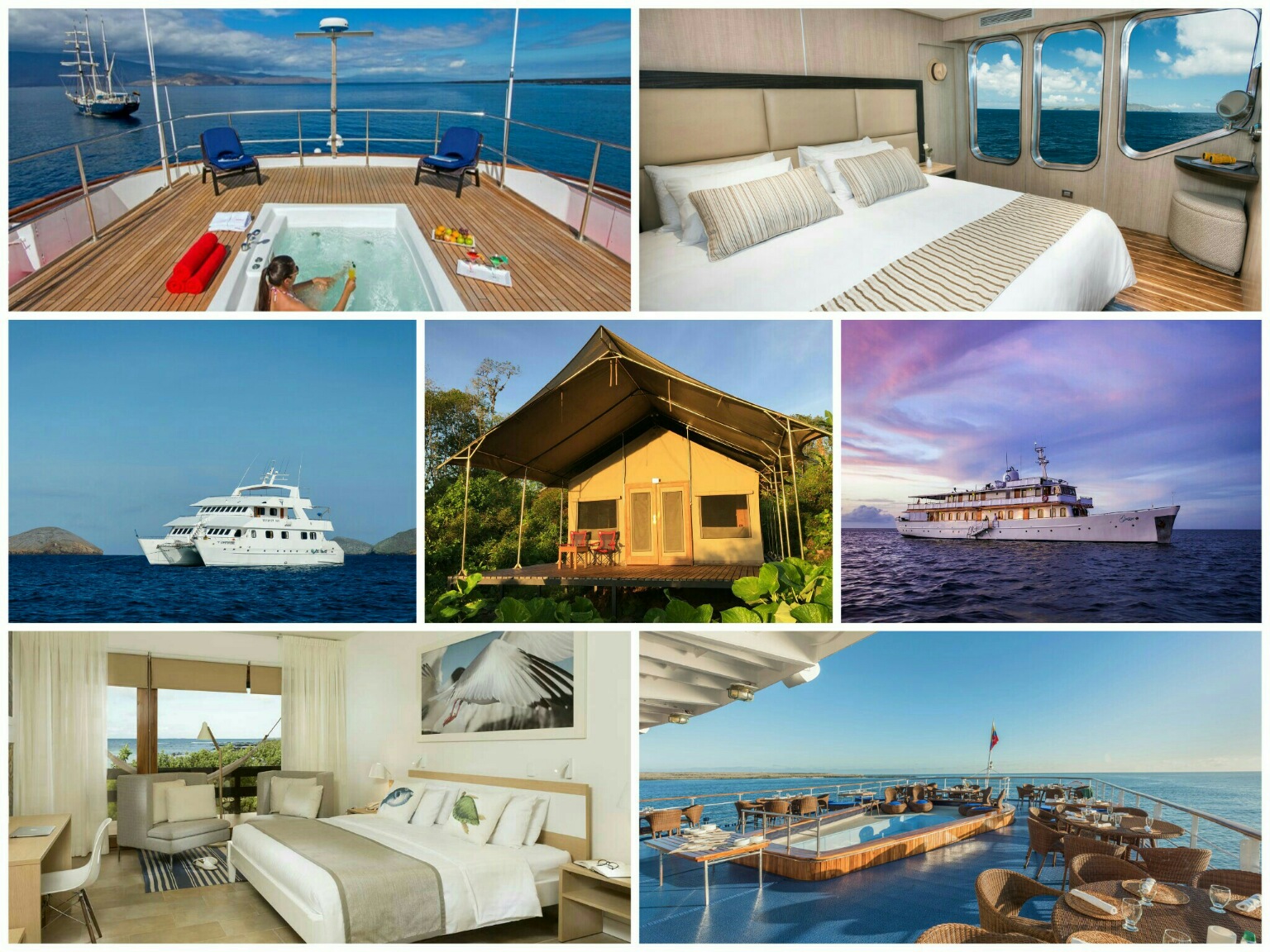 However you decide to explore Galapagos, you can be sure that the experience will remain with you for years to come.

If you want more information on visiting the Galapagos Islands, please do not hesitate to GET IN TOUCH.

For more information on visiting Galapagos, simply CLICK HERE and follow the links through to Ecuador and Galapagos.